Microgaming’s Major Millions is one of the longest running progressive jackpot pokies games online, also available via mobile and tablet devices, and is also one of the biggest rewarding slots in cash prizes.

Both variants share the same military theme and accumulative jackpot prizes, giving players the opportunity to switch between titles without losing the chance to claim the giant progressive payout. 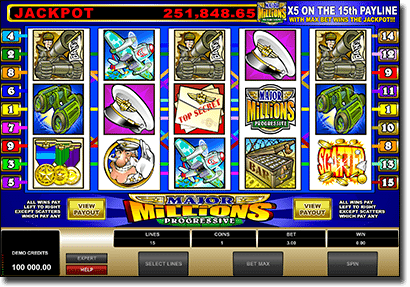 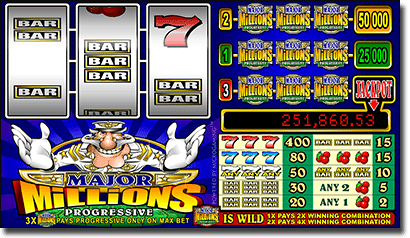 Both variants are only available to play in real money mode, and if there is more than one winning combination on any payline, you are paid out the value of the highest combo.

Gameplay features and the progressive jackpot

Explained below are details about the wilds, scatter symbols and the progressive jackpot across both titles. Major Millions was the first interactive progressive jackpot game to pay out a prize of over $1,000,000 to a single player – in 2002, and has since created multiple millionaires.

The wild symbol and jackpot: The Major Millions logo substitutes for all other icons to complete a possible winning combination.

Each coin you play activates another payline. Always play three coins (all paylines active) to keep your chances alive of winning the accumulative jackpot prize. The three and five reels jackpots share the same value.

Where to play Major Millions for real money

Eligible players 18 years and older can enjoy Major Millions at the below online and mobile casino sites for real cash. Register an account via desktop, laptop, smartphone or tablet, make the most of the advertised welcome bonuses, and gain access to a huge array of real money pokies, blackjack, roulette, video poker and other casino games.

Each gambling site is licensed and regulated by the appropriate gaming authorities and agencies, such as the U.K. Gambling Commission, the Malta Gaming Authority, iTech Labs, the eCommerce Online Gaming Regulation and Assurance body, and BMM Test Labs.

With one of the highest starting progressive jackpots on the Internet, Major Millions has become one of the all time favourites for loyal online and mobile casino members. The background music and sound effects compliment the title, and the simplistic nature of the game is reminiscent of the classic pokies machines of the 80s and 90s.

The $3.00 maximum betting limit, which is required to be played to have a shot at winning the progressive jackpot, is also appealing to lower stakes players who don’t have to spend a fortune just to stay in the hunt for the ultimate prize.