Major Moolah is an online progressive jackpot pokies game produced by Rival Gaming, and remains as one of the most popular and well developed slots title on the Internet.

Where to play Major Moolah at online casinos

While it does not feature some of the more vibrant and interactive features many modern online slots own, such as detailed video animations, bonus games, scatter symbols or free spins, the classic nature of this three-reel pokies title is nostalgic, bringing back memories of lever slots and early 80s and 90s gambling and casinos.

Major Moolah boasts one fixed pay line and three reels, and a constantly increasing jackpot visible at the top of the game. The progressive jackpot has been tracked since December 2009 by the online casino forum CasinoListings, and according to its tracking, the jackpot has paid out, on average, $12,420 per win, and it is won every three weeks.

The pay table is displayed on the left hand side of the screen, and symbols in the game include the following: 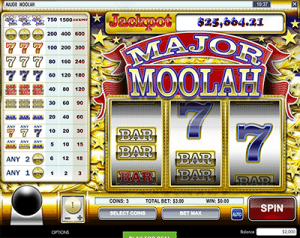 Where to play Major Moolah

Currently, Slots Million Casino is our only trusted and recommended online and mobile casino to offer Major Moolah for real money (legal to access and play for players from eligible countries aged 18 years and older). Slots Million Casino has more than 1700 interactive pokies games, all designed by a range of fantastic gaming providers, including:

These software developers are in constant competition with each other, so the quality of the games provided is always top notch.

Slots Million Casino also boasts the very first online virtual reality casino, which is available to try within practice mode and real money mode, with or without Oculus Rift glasses.

Register an account at www.SlotsMillion.com and make the most of the new member welcome bonus.

Rival Gaming is a world renowned gaming software designer, building games for online casino operators around the world, and ensuring their designs are optimised for mobile, tablet, laptop and desktop platforms.

Founded in 2006, Rival Gaming is known for its i-Slots collection of pokies, which are story-based interactive slots which allow the users to progress through intricate stories of love, lies and deciet while enjoying winning real money.

Rival Gaming uses software such as AS3, Adobe Flash, HTML5, Java Script and PHP to produce its assortment of games, and is one of the leading gaming developers of interactive and engaging titles.

Major Moolah has a classic feel to it, and with jazzy music playing in the background along with casino crowd chatter, it is like you are right on the gaming floor in Las Vegas.

We give this game a rating of 4/5. Play it at Slots Million.