Riding on the coat tails of its predecessor, Mega Moolah Isis is the sister game to the legendary Microgaming online slot Mega Moolah. The original game is responsible for some of the biggest wins in Internet gambling history, so it’s no surprise that Mega Moolah Isis also attracts droves of pokies hopefuls.

The Isis version is very similar to the original, with the main difference being that instead of following the African safari theme of its forerunner, Mega Moolah Isis uses an Egyptian theme with striking symbols from the glory days of Ancient Egypt. 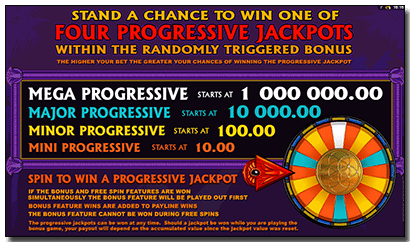 What can you do to aim for the biggest jackpot? That’ll rely on a combination of extraordinary luck and higher bets – the bigger the bet placed, the greater your chance of triggering the mouth-watering Mega jackpot.

However, unlike the original Mega Moolah, the maximum bet does not need to be placed in order to land the highest jackpot and the million dollar prize has been known to have been triggered from a mere 25 cent spin.

Wagering details and game specifics for Mega Moolah Isis are as follows: 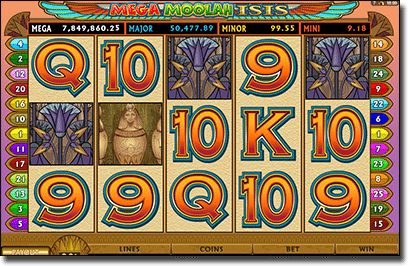 All of the casinos recommended here at CasinoSites.com.au accept deposits in AUD, so you don’t need to worry about how these amounts convert to Aussie dollars; just remember to choose AUD as your preferred currency method when registering for a real money account.

The symbols in Isis are made up of a combination of Ancient Egyptian themed imagery and standard A, K, Q, J and 10 slot machine symbols. The games special symbols and resulting bonuses are:

Where to play Mega Moolah Isis for real money

Given the popularity of the Mega Moolah progressive jackpot games, you’ll find Mega Moolah Isis at a majority of the most reputable and trusted casinos that accept players from multiple countries including some of our favourite Microgaming powered sites:

Due to the progressive jackpot nature of this game, unlike most other online pokies which can be tried for free in demo mode, Mega Moolah Isis requires real money bets in order to spin.

What’s not to love about a game that can make you an instant millionaire simply by throwing down a few cents? We’ve always been huge fans of the original Mega Moolah (for obvious reasons – namely a recent record win worth a staggering CAD $7.5 million) and Mega Moolah Isis is basically the exact same game with a few minor changes in its thematic makeup.

The Egyptian theme is a nice change to the animal dominated original, with simple yet attractive graphics that are presented in classic clean and crisp Microgaming fashion. For ease of play, affordable wagering requirements, vibrant imagery and those tasty progressive jackpots, Mega Moolah Isis certainly gets our tick of approval.

Sign up at Royal Vegas Casino to try your luck at one of the biggest online progressive jackpot prizes.