Pyramid has everyone talking, and it isn’t because the theme is a history lesson – rather, it’s thanks to its unique layout offering 720 ways to win, the only slot online to offer such a format. But this isn’t a history lesson, it is a slot review, so the real question is whether or not it is worth a spin.

How to play Pyramid: Quest for Immortality

As mentioned above, this slot features 720 paylines – thanks to a 3 x 4 x 5 x 4 x 3 row structure across 5 reels, which just keep on giving with the Avalanche feature.

The slot takes place in a pyramid – fitting as the new structure makes the reels look just like one. There is quite a large range in terms of the coin amount and therefore this slot will suit players of all bankrolls. 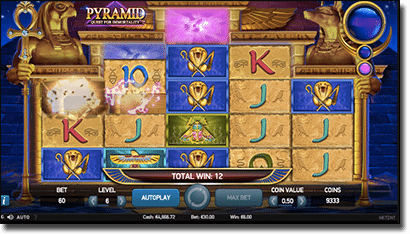 There is an Egyptian-style soundtrack that isn’t too boisterous, while the sound of bricks falling occurs on every spin to coincide with the Avalanche feature.

It’s as though NetEnt came up with intricate Egyptian-themed symbols, such as a Cleopatra mask and a sphinx, as the middle value symbols, and then couldn’t think of any more that coincided with the theme so included the traditional 10 to A symbols as the lower value symbols instead. This does make it easier to determine what symbol is lower in value without looking at the paytable however, so we aren’t complaining.

Wild symbol:
The Wild symbol is the ankh in the centre of the ‘Wild’ text. The ankh is an Egyptian symbol that represents immortality, tying the theme in nicely, and substitutes for all symbols to create a winning payline. It is also key to the main bonus feature.

There aren’t as many features as we generally see on NetEnt slots, but the one’s included are quite interesting.

We have seen this feature before, specifically on Gonzo’s Quest, but it actually ties in better here since we are set inside a pyramid made out of limestone blocks.

For those who are unaware, the Avalanche Feature sees blocks fall instead of spin, every time you press the button. On every wining combination, these symbols, or blocks, crumble to dust and new symbols/blocks fall into their place. This is basically a free re-spin every time you do score a win, therefore acting as a Free Spins bonus.

The best part to this feature though, is that you can up to a 10x multiplier simply by landing three consecutive wins.

An extension on the Avalanche feature, and the only real bonus feature. You will notice each time you press spin that there are blue, glowing spots underneath the top three symbols/blocks. Any time you land a win involving the symbols in these positions will see them transform into a Wild for the next free re-spin created thanks to the Avalanche Feature.

NetEnt has also released the slot in their Touch range, meaning it is compatible with modern tablets, such as the iPad Air, the Surface, and others, as well as smartphones, such as the iPhone 6s, many Android devices and more.

We recommend heading to www.SlotsMillion.com, one of the best mobile casinos, via your mobile browser and downloading the web app to play.

There aren’t any free spins involved in this slot, which can turn many off. However, the Avalanche feature is slowly taking over the free spins in our books due to the fact you get a free re-spin on each win and a large multiplier after just a few consecutive wins.

The Wild Generation feature is quite unique, though it isn’t exactly the most exciting feature. Regardless, this is a great slot and the symbols tie in well with the theme, while the Avalanche Feature is a welcome addition where you can win a huge jackpot of 3,600,000 coins.