Rooks Revenge has been around since 2012 and remains one of the most popular titles in the BetSoft Slots3 collection. Fans of NetEnt’s Gonzo’s Quest will see the similarities: both use a Mayan Aztec theme with a quirky character hanging out on the side of the reels and cascading symbols. Rooks Revenge is in a league of its own, though, thanks to the incredible 3D graphics.

How to play BetSoft’s Rooks Revenge

Rooks Revenge uses fun, colourful animation and the addition of a free spins multiplier means there’s some potentially hefty wins up for grabs. If for nothing else, try this game to enjoy the uplifting beats and the hilarious moves whipped out from the Mayan chief every time you strike a lucky spin.

Rooks revenge is a five reel, 25 payline 3D pokies game that uses cascading symbols, which are symbols that fall down into place on the reels rather than spinning to a stop like traditional pokies. These stone symbols are made up of Aztec designs and cascade down against a backdrop of the luscious Amazon jungle, exploding every time a winning combination lands. The specifics of the game are as follows: 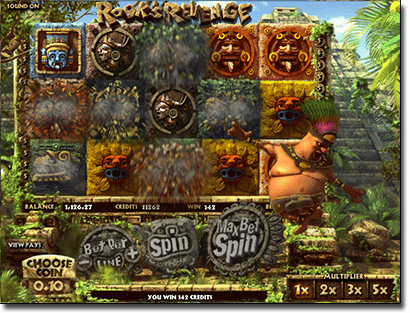 Rooks Revenge doesn’t some with any additional bonus games, but the exploding wild feature complete with free spins multiplier is what this game is all about.

Wild symbol – the black and gold Aztec symbol acts as the games wild, appearing on reels two, three and four only and can substitute for all other symbols to form a winning combination. 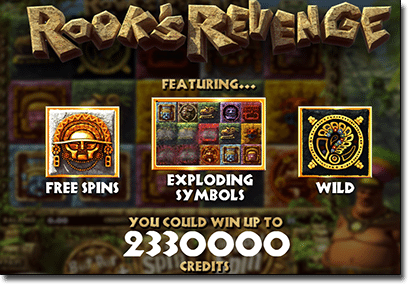 Exploding symbols and multipliers – the use of cascading symbols means that anytime a winning combination lands, the winning symbols explode, making way for new ones to fall down and take their places.

Multiplier – you’ll notice the multiplier box in the bottom right hand corner of the screen displaying 1X, 2X, 3X and 5X. The multiplier bonus is triggered if you land a second winning combination after exploding symbols are replaced and will continue to increase until a non-winning spin is placed. This awesome feature gives you the chance to win up to 5X your original bet from a single spin.

Free spins – free spins are triggered by the golden mask symbol which is the games scatter. The golden mask symbol only appears on reels one, two and three, with the appearance of three or more masks in a winning combination on any of the active paylines activating the free spins bonus. Free spins can also be re-triggered during free spin rounds. Even more exciting is that when free spins are in play, the multiplier box down the bottom increases from the usual 1X, 2X, 3X and 5X to a huge 3X, 6X, 9X and 15X which is where the real money can be made.

Rooks Revenge can be found at some of the leading Internet casinos offering BetSoft’s 3D pokies, including our favourite real money pokies sites:

Follow our links to take advantage of great welcome offers and promotions and start playing Rooks Revenge and the rest of the Slots3 collection in AUD today. This game has also been beautifully optimised for mobile play and can be enjoyed on your smartphone or laptop.

BetSoft’s Slots3 collection can really do no wrong in our eyes and Rooks Revenge is no different. The enthralling graphics and lively animation of these 3D slots adds so much value to the gaming experience, so that even when you’re not on a winning streak you’re still completely engaged with the characters and the action. BetSoft has created some of our favourite pokies characters to date (think Mr Vegas, The Slotfather, Safari Sam and so on) but the big Mayan chief of Rooks Revenge is up there with the most lovable of all.

For the vibrant jungle backdrop, the intricate Aztec symbols, the kick ass exploding symbols with their potentially huge multipliers but most of all for the big-boned yet insanely flexible warrior chief and his hilarious celebratory dances, Rooks Revenge definitely gets our recommendation.