It is only Christmas one day of the year, but Microgaming’s Secret Santa slot is available 365 days a year, so you can get into the spirt regardless if Christmas is a fair way off. If you are a bit of grinch it might be best to steer clear of this slot as it features everything you’d expect on a traditional Christmas day, including presents, a turkey, Christmas Puddings, and more.

How to play Secret Santa

Secret Santa is one of a select a few from Microgaming’s catalogue that features 1024 ways to win, so even if you aren’t a fan of the Christmas theme you should trial the ways to win format.

The soundtrack isn’t too overpowering during the base game, but beware just as your excitement levels are heightened during the array of bonus features (there’s seven including the Free Spins feature), so are the backing sounds so you may want to mute this by disabling the sounds in the ‘options’ setting.

Secret Santa has a higher minimum spin than most slots (due to the ways to win format) so if you aren’t a high roller you may want to want to ask for cash for Christmas so you can play for long enough to experience all the bonus features it includes. While Microgaming have chosen to represent Christmas with appropriate traditional symbols, they’ve scrapped the traditional 9, 10, J, Q, K, and A symbols and have used colourful suit symbols such as the clover, diamond, heart and club to represent the lowest value symbols. 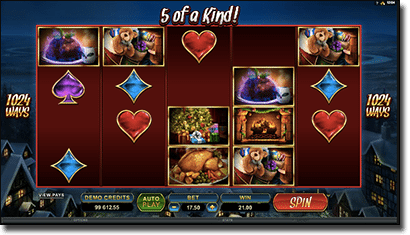 The middle paying symbols are represented by a Santa symbol, a tree surrounded with presents, a fireplace, a stocking filled with toys, a turkey, and a Christmas pudding. While these aren’t indicative of an Australian Christmas, it still gets us in the mood to celebrate, especially when we spin the Wild and Scatter symbols.

Wild symbol: The Wild symbol is the slot’s logo and substitutes for every single symbol except the Scatter to create a winning combination.

There are a whopping seven bonus features available on Secret Santa, which is a gift in itself.

Wild Boost: A symbol is elected randomly and transforms into a Wild symbol.

Mystery Multiplier: Players can receive a 5x or a 10x multiplier.

Dashing Wilds: Four symbols are selected randomly and are transformed into Wild symbols.

Scatter Spree: Every symbol on the reels are transformed into Scatter symbols and will payout in any position.

Rolling Reels: Players receive an increasing multiplier on consecutive wins. The multiplier can reach up to 12x .

Five of a Kind Again: If a winning combination is formed featuring five symbols, excluding a Wild symbol, the Five of a Kind Again feature is triggered and sees the fives symbols transform into different symbols to create another five of a kind win, and acts as a mini re-spin with a guaranteed win.

Free Spins: There are five free spins up for grabs with a 3x multiplier available.

Any of these features can be triggered during the base game at any time.

Where to play Secret Santa

Our favourite place to spin the reels of Secret Santa is www.RoyalVegasCasino.com, powered solely by Microgaming. However if you prefer variety, our casino table at the top of the page has other reliable and trustworthy online casino recommendations that ensure you have a fun, but safe, online experience.

Our thoughts on Secret Santa

Secret Santa has a tonne of bonus features that would get even the biggest grinch into the Christmas spirit and the 1024 ways to win format is a unique addition to trial if you haven’t before.

While the theme is holiday-specific, with stunning graphics to match, if you aren’t a fan of the holidays you can look past this thanks to the free spins, array of Wild bonus features, and much more.

It didn’t take us long to trigger some of the bonus features either, which is definitely a bonus in our books.