NetEnt’s latest slot, Secrets of Atlantis, takes players on an underwater adventure with some interesting ways to win. Played across 5 reels and 40 pay lines, Secrets Of Atlantis’ unique features and bonuses make for a highly entertaining slot, and yet another fine addition to NetEnt’s catalogue.

How to play Secrets Of Atlantis 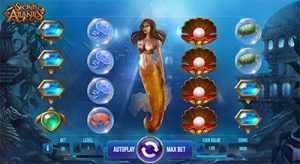 Secrets of Atlantis offers a number of different ways to win, including the opportunity to win both ways, which really opens up the possibilities for players. Its Wild mermaid feature takes up an entire reel, while the Nudge, Highlight and Colossal symbols can lead to some huge wins.

There’s fantastic variety in terms of how you can win playing Secrets Of Atlantis, and even without a major Free Spins feature (free re-spins are common, however), it’s a slot that feels highly rewarding.

The specifics for Secrets Of Atlantis are as follows:

Secrets of Atlantis’ mythical theme is quite engrossing. Based on the city of Atlantis, which in Greek Mythology is said to be at the bottom of the sea, this slot’s underwater design blends in well with its varied symbol design, ambient tones and bright aesthetic. The symbols, made up of pearls, crabs and jewels, as well as plenty of other valuable Atlantis artifacts, blend in well with the exciting yet subtle mermaid Wild, while the slot’s Colossal symbols and re-spin features give the game a nice boost in colour and effect whenever these modes are activated.

It’s simple in design, yet soothing and incredibly fun to play. Its subtle animations and peaceful music fit the Atlantis mythology perfectly, making for what should be an entertaining time. 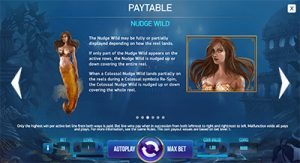 The gameplay of Secrets Of Atlantis is built around the game’s Colossal symbols feature, and its centralised re-spin bonus. While there’s no free spins bonus per say, the re-spin feature can lead to some massive wins, and happens often enough to offset any missing free spins bonus.

The highlight feature, which takes up the three central reels, can offer some huge wins once the colossal symbol comes into play. Combine this with the mermaid wild and you can see why Secrets Of Atlantis is such a lucrative slot to play.

It may initially feel rather shallow on the bonus front, but this slot balances out its lack of extravagant bonus modes and Wilds with two highly rewarding bonuses, both with huge potential.

Where to play Secrets Of Atlantis

You can play Secrets Of Atlantis at many of our recommended sites, including those listed in our casino table above, all which host NetEnt online pokies software. All are verified by industry watchdogs like eCOGRA, are safe and regulated for player deposits, and have hundreds more pokies on offer from NetEnt and other game developers. Use our table to read detailed reviews of each casino site or sign up directly to claim exclusive new player welcome bonuses.

It’s a bit shallow on the bonus side of things but NetEnt’s latest more than makes up for that with a great theme, fun gameplay and some fantastic opportunities to win big. The Wild nudge feature is more common than not, but it’s the Colossal re-spin bonus that really makes things interesting. Secrets Of Atlantis’ ambient design and smooth music perfectly complement the game’s unique ways to win. Check it out at any of our recommended casino sites for free or real money play.