Playtech’s Space Invaders harkens back to the good ol’ days of retro arcades, greasy arcade sticks and loose change. We review their take on the classic video game and if it made the transition to the pokies format successfully.

How to play Space Invaders 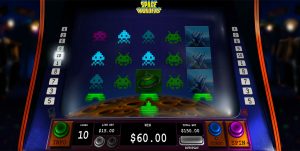 Powered by 5 reels and 10 paylines, it’s based on the original arcade video game of the same name, and can be played for as low at $0.10 per spin. With a unique Wilds feature and UFO re-spin feature, it offers frequent and exciting ways to win, even though it is low on additional bonus rounds.

Space Invaders pokies can be played on desktop, mobile and tablet devices from as little at $0.10, up to $100 per spin for players with a higher bankroll. The original video game, produced by Taito, was a cultural phenomenon, so it’s no surprise that it’s eventually made the transition to online slot. It blends retro-style pixelated graphics with an eerie, sci-fi backing soundtrack,

The base game is designed much like an original arcade machine, with a CRT television display and coloured buttons mimicking the old arcade cabinets. Select your line by pressing either the plus or minus sign, and then press the pink “Spin” button to get things going. The “Turbo” mode, frequently used in Playtech’s games, offers a faster experience if you like to stop the reels mid-spin.

The betting options for Space Invaders are as follows: 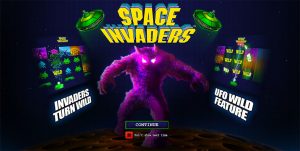 Space Invaders is a bit hit and miss in this area. Playtech really could have taken adventure of it and blended modern visuals, sounds and animations with a retro theme, but the whole design comes out looking a little tired and slow. It’s fitting considering the source material, which is understandable, but next to, say, an Age Of The Gods slot, Space Invaders can be a little on the simplistic side.

Things get somewhat exciting when you initiate the re-spin, but outside of that there’s not much to get excited about. That said, Playtech has to be applauded for honouring the Space Invaders name, with a suitably retro look and feel, even if it is lacking in the excitement stakes. 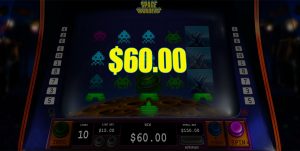 Space Invaders benefits from allowing players to win both ways. The reels feature pixelated aliens, spaceships, flying saucers, monsters and planets, and lining these up can lead to big wins, especially when combined across the reels and when you add Wilds into play. Symbols can appear stacked as well, with the highest value symbol of the bunch being the planet, which can potentially reward you with 150x times your initial line stake.

Where to play Space Invaders

You can play Space Invaders by Playtech exclusively at www.Casino.com. Casino.com has been verified by industry watchdogs like eCOGRA, is safe and regulated for player deposits, and has hundreds more pokies on offer from Playtech and other game developers.

Space Invaders is lacking in modes, and its overly-retro theme can be a little on the drab side, but there’s some potential here. Both the random Wild win on reels 2 and 4 can lead to big wins, especially if you get more than one, and if there’s more than one win across the reels.

The UFO Wild re-spin can lead into free spins, as I managed to get four in a row and win close to 400x my stake. This seems to be rare, though, but it’s obviously possible. The lack of additional bonus modes is a downer, but the moving space ships and doubled stake on additional Wilds makes it worth a look.