NextGen Gaming has released a truly unique pokie experience in its latest online slot offering, Spin Sorceress. At face value Spin Sorceress may appear to be a generally conventional 243 ways online slot but NextGen have upped the ante with the possible Super Bet options on the right hand side of the gaming screen.

How to play Spin Sorceress slots

Spin Sorceress is a five reel, 243 ways online slot. You can play it for free or real money at SlotsMillion.com. Betting range varies greatly thanks to the Super Bet, depending on which level you are betting you can wager anywhere from $0.50 per spin up to $2,000 per spin. With such varying bet levels, this game truly caters to all punters. NextGen have done well creating a comic-book looking, mythical themed online pokie with a strong main character, the Spin Sorceress. The mythical theme of the game is backed up by the soft, magical sounding background music which matches perfectly with what NextGen are clearly going for.

NextGen have been experimenting with a bonus bet option for a couple of years now. It has been prevalent in their previous DC Comics releases in particular: Wonder Woman, Superman, Green Lantern and the Flash. The Super Bet was introduced in Judge Dredd, but it is here in Spin Sorceress that NextGen have refined their Super Bet feature.
So what is the Super Bet?

Prior to commencing your spin you can choose which level of the Super Bet you want to play. You can even decide how much each coin you bet will cost during normal or Super Bet play, anywhere between $0.02 up to $4 each.

The Sorceress Wild Reels can be randomly triggered at any time during general play whether the Super Bet is on or off. When the Sorceress WIld Reels is triggered the Sorceress will appear to enchant reels two, three and/or four with a wild symbol. 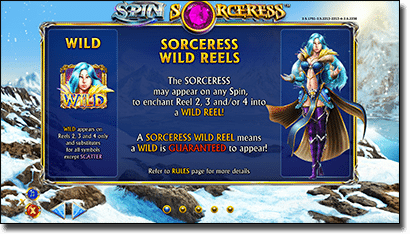 Any three or more scattered necklace symbols triggers 10 free games. During free games your Super Bet level is still applicable. Spin Sorceress also has a gamble feature available after any win you have.

To really make the free games worth your while the Sorceress Wild Reels are triggered for every spin so that means at least one guaranteed wild per spin. That paired with your Super Level wild multiplier adds up to some potential big wins.

The Spin Sorceress wild substitutes for all symbols except for the scattered necklace symbol.

Spin Sorceress is an absolute doozy of a game. NextGen have hit this one out the park. The possibility of increasing the RTP by increasing your level of Super Bet is a stroke of genius.

Between the Super Bet, the Sorceress Wild Reels and the 10 free games feature there is so much potential for big wins in this game that it is stupefying that a gaming production company would offer a game so good.