At first glance, Microgaming’s Stardust seems like a pretty stock-standard pokies game (albeit with some pretty striking graphics) but at a closer look there are all kinds of cool features within this game, with an exciting, unique spin on some standard features.

How to play Stardust

Stardust follows an intergalactic theme, full of gems and spacey imagery, with free spins, re-spins and the sought-after Stardust Meter. Stardust is unique in that the base game has 40 paylines, but trigger the free spins bonus and it turns into a 1024 way pokies, adding a lot to the appeal of this game with bigger chances to win.

There are several bonus features waiting to be unlocked, offering a total jackpot of 100,000 coins. Place your desired bet size by clicking the plus and minus symbols in the betting section, click spin and you’re on your way to securing some big wins. The game specifics for Stardust are as follows: 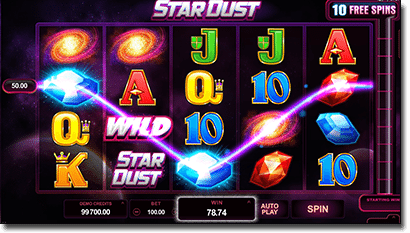 The symbols in Stardust are made up of a mix of galaxies, gems and the standard A,K,Q,J,10. There aren’t any separate bonus games, but instead some big bonus potential within an innovative free spins feature.

Where to play Stardust slots for real money

Stardust is available to play directly over your web browser for free or real money bets at leading Microgaming casinos including:

Each of these trusted sites welcome Aussie players and accept payments using a range of deposit options including Visa, MasterCard, Neteller, Skrill, and Paysafecard. You’ll also find hundreds of other pokies available along with roulette, blackjack and other table games. Click our links above to play Stardust at any of these secure casinos and receive awesome welcome packages that include matched deposit bonuses and free spins.

Simple yet effective, Stardust cranks the excitement up with the addition of the Stardust Meter which well makes up for the fact that there’s no scatter symbol. It’s a real kick to hope for an appearance of the Milky Way symbol and to watch as the meter fills up, and it’s even better when that sweet 1024 way free spins feature kicks in. While the base game has some decent winning potential, it’s the free spins bonus where your real dollars will be earned so it’s worth holding out til that meter is full.

If you’re not looking for a game that uses outrageously entertaining animation, Stardust is a clean, vibrant slot game that will definitely appeal to the pokies purists out there. It’s a good one to play with the speakers on as the soundtrack is quite tranquil, leaving you in a kind of Zen state as you watch the reels spin against a dreamy galactic backdrop.