Starquest is the latest slot from BTG (Big Time Gaming), featuring 117,649 paylines, which is probably the most impressive thing about this slot. Its space-bound theme is spread out across a unique 6-reel system, each of which can house anywhere between two and seven symbols. As you can probably see, Starquest is extremely unique in the ways in which you can win, but beyond that, it lacks the lift-off to stand out from the crowd.

How to play Starquest 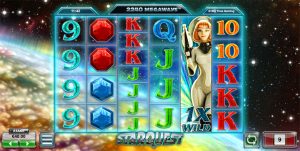 Starquest appears to have quite a bit in common with BTG’s other recent release, Dragon Born. Both belong to the “Megawin” series, featuring the multi-way win feature that can lead to the 117,000-plus ways to win. Starquest achieves this through its unique reel design.

To get things started, you’ll need to sign up to one of the many great online casinos hosting Starquest. You can sign up to Slots Million and play for free before investing real money.

Once you’ve signed up, you can check out Starquest’s unique ways to win. Each of the six reels sport differently sized tiles. This means that each reel can break off into anywhere between two and seven tiles. The big wins, however, come in the form of the red-haired space girl, who takes on the role of sticky wild across an entire reel. This is ultimately where the big wins come from.

Let’s check out the betting basics for Starquest.

There’s not much to love about Starquest’s theme here. It’s space-bound theme leaves a lot to the imagination, as it doesn’t really set off into any sort of special and memorable animations when the re-spins or bonus rounds are set off. It’s basic in design, which probably gets the job done for some players, but it lacks much in the way of creativity. Some slots do a good job of remaining subtle yet excelling at combining simplicity with the complexity and excitement of big wins, and unfortunately Starquest doesn’t quite achieve that with its theme.

Starquest’s base game doesn’t reward the player anywhere near enough to compliment its attempt at excitement with its theme. While the sticky wild re-spin feature and Starquest bonus are nice ways to win big, they don’t happen anywhere near enough to make the game exciting. The adjusting reels can lead to some big wins, but you’re relying on the lowest-paying symbols in this regard to net you some big pay backs. Nonetheless, Starquest does have some interesting features once they do appear, so let’s go through them.

Where to play Starquest

You can play Starquest at many of our recommended sites, several of which host BTG online slot software. All our recommended casino sites are verified by industry watchdogs like eCOGRA, are safe and regulated for player deposits, and have hundreds more pokies on offer from BTG and other game developers. Slots Million gets our number one vote for Big Time Gaming slots, with new players eligible for up to $100 in bonus money when depositing real money for the first time.

Starquest isn’t a terrible slot by any means, but it lacks much in the way of excitement. There are certainly better space-theme slots out there from the likes of NetEnt and Microgaming. Fortunately, it does offer some big ways to win, but the Wild re-spin feature doesn’t happen often enough, which means this slot grossly underperforms on the rewarding scale.