It’s a clear indication a slot has been well received when a sequel is released, and this is the case for Microgaming’s Thunderstruck poker machine. Thunderstruck II is an updated and improved version of the prequel, and while it has the same theme and premise, there are a lot more gameplay features.

How to play Thunderstruck II

We follow four Gods across five reels with 243 ways to win on Thunderstruck II, featuring the infamous Thor. The game has a multi-level free spins bonus, as well as the usual Scatter and Wild symbols. There is even an extra feature called the Wild Storm feature which is activated at random.

Following the same Norse-God mythology theme its predecessor had, Thunderstruck II has incredible graphics which show upon the first spin. There are an array of innovative features we have come to expect from the top leading software developer, Microgaming, too. 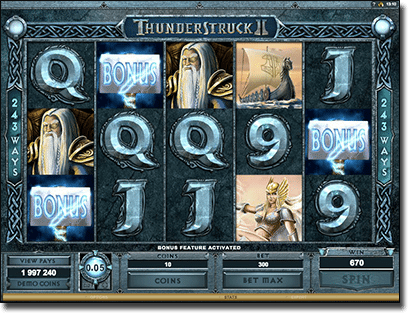 Thunderstruck II isn’t as animated as some other slots we have seen, but the graphics are still of high quality and match the theme. Microgaming have included the usual 9, 10, J, Q, K, and A, as the lower value symbols, while they have used characters, castles and more to represent the higher value symbols. 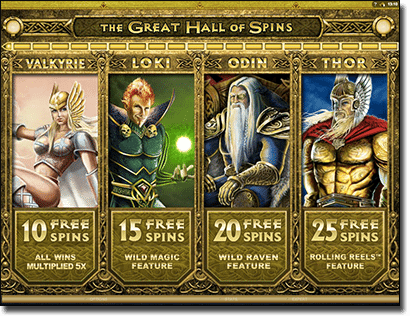 Wild symbol:
The Wild symbol is the Thunderstruck II game logo that sees any winnings doubled when a winning combination is formed with the symbol. 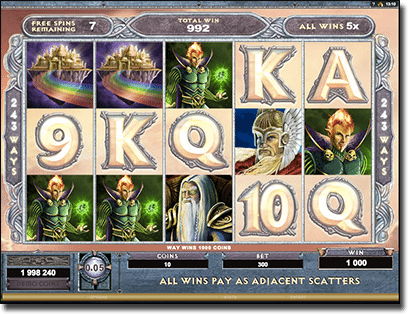 Next up is the Odin Bonus Game that is activated by players spinning at least three Scatter symbols 10 times. Players unlock 20 free spins and every win during these free spins sees symbols changed to Wilds and wins multiplied by 6x.

Finally there is the Thor Bonus Game, which requires at least three Scatter symbols to be spun 15 times. Players are awarded 25 free spins and the Rolling Reels feature is activated upon a win during these spins. Any wins from the Rolling Reels sees the payout doubled. Additionally, consecutive wins see a multiplier from 1x increase up to 5x.

Each bonus has a different backdrop and colour scheme which adds to the ambience.

Wild Storm Bonus:
During the base game there is another bonus game, but this is randomly activated throughout game play. Here up to five reels are turned Wild, creating huge wins for players.

Play Thunderstruck II on your mobile or tablet

Microgaming have released Thunderstruck II on the HTML5 platform, meaning if you have an Apple, Android, Windows, or other smartphone or tablet you will be able to play the mobile version of the slot. Some popular devices most players use to play Thunderstruck II include:

Now you know how to play Thunderstruck II, we thought we would detail the differences between the two versions.

While both options are quality slots, we prefer Thunderstruck II due to the bigger jackpot and multi-level bonus round.

Where to find Thunderstruck II

Since Microgaming is a top leading software developer, their corresponding online operators offer players multiple trustworthy and reliable sites to play at, with the option for players to download the casino for PC users, or play via their Web browser, such as Safari, Firefox, or Chrome for both PC and Mac users.

Additionally, Microgaming’s software allows online operators to offer mobile versions of their sites, which is perfect for Thunderstruck II since it is available on smartphones and tablets.

Our favourite Microgaming casinos that you will find Thunderstruck II are:

You can also find Thunderstruck II at some of our other favourite Web casinos that offer a variety of software providers, but only in instant play mode.

Our verdict on Thunderstruck II

Microgaming was one of the software developers responsible for sparking interest in multi-level bonus rounds, and Thunderstruck II exhibits this. While it can take a bit to get to the other bonus levels you can re-trigger the free spins during the first level free spin bonus game meaning it is possible to unlock the next levels while spinning for free.

There are so many features to the slot to keep you interested and makes playing for a while worth it. The graphics of the Norse God theme is quite unique amongst all of the mythological slots available and with a jackpot of 2.5 million coins on offer we can’t really pass this one by.