While there’s no shortage of fantasy themed slot games online, the addition of a couple of potentially lucrative and entertaining bonus features makes Tower Quest superior to the competition, with graphics masterfully embodying the classic dungeons and dragons fantasy style.

How to play Tower Quest

Tower Quest is a five reel pokies with 20 fixed pay lines, which means the number of active paylines can’t be changed. Players have full control over the coin size and number of coins bet per spin, with an auto-play option that allows you to play up to 50 spins without having to move a muscle. The game opens with an animated video intro to set the scene, with a stealth soundtrack continuing to add to the ambience.

Wagering details and game specifics for Tower Quest are as follows: 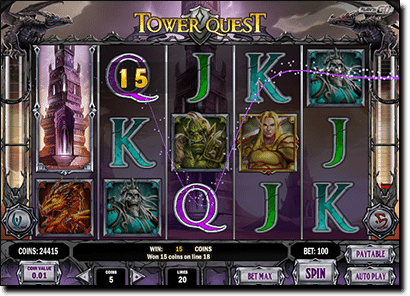 Play’n Go have optimised Tower Quest for mobile, so it can also be played on your smartphone or tablet for real money wagers.

The reels of Tower Quest are made up of creative fantasy characters and objects along with mystically designed A, K, Q and J symbols. Wins will activate animations, with symbols coming to life to keep the game as entertaining as possible. The real highlight of Tower Quest is the sweet bonus features on offer:

Despite having some fantastic pokies under its belt, games by software provider Play’n Go aren’t as widespread as bigger brands like Microgaming or NetEnt, so games are a little more difficult to come across. Luckily a couple of our favourite online casinos offer a range of Play’n Go slot titles, along with Tower Quest which can be played for free in demo mode or for real money bets at these reputable sites, as well as the top-rated casinos listed in our table above:

Both Guts and Slots Million offer great welcome bonuses for new players, so follow our links to take advantage of any specials on offer. Each of these sites use SSL digital encryption security to ensure players personal details and financial information is protected at all times.

Whether or not you like Tower Quest will really depend on your personal attraction to the fantasy genre. If you’re a fan of dungeons and dragons in the genuine old-school style, then Tower Quest will have you frothing for more. Those who don’t dig this style may find it a little antiquated, despite the level of details used by Play’n Go, that’s just the nature of the fantasy genre, it seems to be either love or hate.

Regardless of your personal preferences, Tower Quest is a really well designed pokies game and the addition of the red and blue flask bonus features add a huge element of entertainment, making this game stand out from the other fantasy themed pokies out there.