How to play Treasure Nile

Treasure Nile is a five reel game with nine paylines. The progressive jackpot is won on an average of every 20 days and has an average win of around $95,000. Wagering details and game specifics for Treasure Nile are as follows: 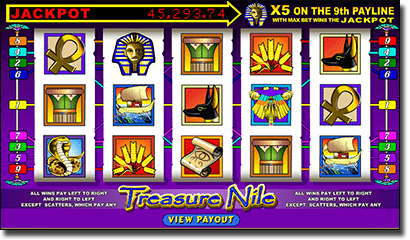 Ancient Egypt has been a popular theme used by online pokies developers over the years, but Treasure Nile was one of the first. Symbols are made up of Egyptian relics like and icons including the Sphinx, Anubis, Ankh, cobra, golden necklace, scroll, pillar, wheat and a boat, with reels set against a vivid purple backdrop.

The game uses a tranquil soundtrack made up of riverside noises which is surprisingly relaxing, and is definitely worth playing with the volume on.

Treasure Nile has a wild and a scatter symbol but no bonus games or free spins. It’s real appeal is the progressive jackpot.

Where to play Treasure Nile for real money

Each of these secure sites offers a range of safe deposit options in Australian currency. As with all progressive jackpot pokies, Treasure Nile can only be played for real money bets so unfortunately you can’t demo this game in free mode.

With the high quality graphics and innovative features used by leading software developers today, it only takes one glance at Treasure Nile to know that this game is a little lacklustre in the visual department. In saying that, some players prefer the old-school style of classic video slots without all the bells and whistles, plus when it comes to progressive jackpot games, it’s the possibility of striking it rich that is the real drawcard.

Treasure Nile may not be the most entertaining pokies out there, but the graphics are still vibrant enough and the lure of the jackpot is so strong that this game is definitely worth a try at our recommended casinos.