WolfPack Pays is a stunning video pokie and the features on this May 2016 release are incredibly innovative: we review whether it’s worth playing.

Where to play Wolf Pack Pays for real money

How to play WolfPack Pays

WolfPack Pays is a 5 reel, 243 ways to win pokie set on a mystical backdrop of hills and rivers.

When you open the title you are greeted to a huge audio sound effect, which can surprise you if you aren’t ready, but then it calms and you are taken to the reels. The main soundtrack is quite soothing when you aren’t playing, and suspenseful audio effects added when you are spinning the reels. On a win the mechanical pokies sound is present but you can mute the audio in the bottom left hand corner if you aren’t a fan.

You can play the 243 ways to win pokie by playing 40 coins, adjusting the coin size to suit your bet. As you can see there isn’t a Scatter or Free Spins symbol, but this doesn’t mean there aren’t any free spins – NextGen have just created a unique way to win them.

Interestingly, there aren’t many symbols on this pokie: five standard symbols plus a Wild paying symbol.

You’ll come across a contrast in symbols on these reels. Some are intertwined with the theme, others are not.

This is all there is, except for the Wild symbol which performs its usual function and offers a payout too.

This is where things get interesting, with WolfPack Pays featuring an innovative way to get free spins, plus the On a Roll Feature.

On a Roll feature

This is an incredibly unique feature which gives you a free Re-Spin on every win.

The free Re-Spins continue for every consecutive win until the fourth Re-Spin, and here the WoldPack Feature is triggered. 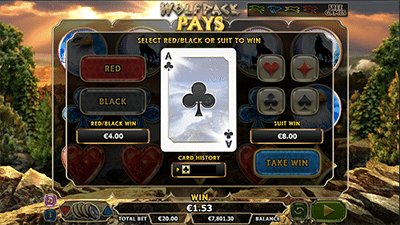 If you score a win on the fourth consecutive free Re-Spin you will trigger the free spins. Essentially, you are you receiving four free spins before you even trigger the Free Spins feature – and while it may seem hard, it really isn’t.

A wolf metre in the top right hand corner will fill up on each free re-spin, and even if you don’t make it to four you will still be scoring free spins on every win.

Once you fill the metre up and trigger the WoldPack Feature, the metre transforms into three paw tokens and you will be awarded with free spins until you use up all the paws. The paws disappear on every spin which isn’t a win – so you could end up with a lot of free spins on your hands.

What’s more, five extra Wilds are added to the reels so there’s some big wins up for grabs here.

There’s also the addition of the Gamble feature which you can only opt for after the On a Roll feature has finished. Here you can double your winnings by picking red or black correctly, or quadruple them by picking the suit correctly. Remember you can also lose all your winnings if you answer incorrectly.

Interestingly, Microgaming have a similar title called Untamed Wolf featuring 243 ways to win – however we have to say it isn’t as fun as NextGen’s version.

The graphics are visually appealing, though NextGen could’ve included more symbols to tie in with the theme, but the features make the pokie really stand out.

The innovative On a Roll feature means we basically have two chances at winning on every spin, and to receive free Re-Spins as we try to trigger the Free Spins feature is incredible – especially with Wilds added.

It can seem hard at first to trigger the feature, but compared with simply spinning three Scatters or Free Spins symbols, this title is much more rewarding in the lead up to activating the WolfPack Pays feature. When we triggered it, we scored around 15 free spins before the paw tokens ran out and won almost $7000, with our initial bet being $20. Overall, we’re over the moon about this pokie by NextGen.