Strangest gambling superstitions from around the world

Strangest gambling superstitions from around the world

No matter where you come from, there are all kinds of crazy superstitions that players live by when it comes to gambling. These gambling superstitions mostly arise from cultural beliefs and ancient folklore and while some make sense, others are just plain whacky. If you’re looking for inspiration next time you’re playing at an online casino, we’ve compiled some truly oddball gambling superstitions from around the world. 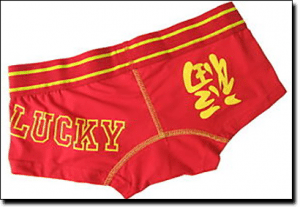 The colour red is also considered incredibly lucky in China as it symbolises fortune and joy. Not only is it used during major celebrations like Chinese New Year, but you just may see Chinese punters wearing an item of red clothing when gambling, hoping to soak in its fortunate colour rays.

It’s common for Chinese gamblers to wear a pair of red underwear when hoping to win, with vendors selling this item all over the country. Chuck on a red pair of undies and throw a roulette bet on eight and see if these ancient Chinese superstitions work for you.

Wanna get lucky next time you’re playing the pokies? According to ancient South African beliefs, all you need to do is have a puff on some good old fashioned vulture brains. The belief is that smoking vulture brains will bring you good luck by giving you the power to see the future, which stems back to a traditional medicine practice called muti (what we Westerners would refer to as voodoo magic) The brains of this endangered bird are dried, then ground and smoked in cigarettes.

The ancient ritual has been used by modern day gamblers in South Africa in the hope that it’ll enable them to choose winning lottery numbers or predict the outcome of sporting events. With this out-there practice remaining in use today, the already endangered vulture is now on the verge of being completely extinct.

Indian’s have some fascinating beliefs regarding bad luck and grooming. In India, ancient Hindu superstitions dictate that having your hair cut on a Tuesday will bring you bad luck, so Indian gamblers will steer clear of this before hitting the casino or placing a bet of any kind.

This stems from hundreds of years ago, when a large portion of Indian men worked as farmers. Monday was considered a day of rest and maintenance, so most men would have their hair cut on Monday, leaving local barbers to shut up shop on Tuesdays due to lack of business. To this day many barber shops in India remain closed on Tuesdays due to the widespread belief that a hair cut on this day will bring bad luck.

Trimming your fingernails or shaving after dark any day of the week is also considered bad luck. Before the days of electricity, these two things could potentially be dangerous once the sun went down, which is how the superstition arose.

Over time, a story developed that evil spirits would arise at night and come searching for flesh if remnants of fingernails or facial hair could be found. So don’t worry if you’re growing a rough beard or your hair and nails are in desperate need of a trim before gambling, according to Indian tradition this will bring you good luck.

If you just so happen to have a penis medallion lying around the house, do as the Thai’s do and wear it tied around your waist inside your clothes next time you play for real money at an online casino.

According to Thai culture, these special phallic pendants known as “Palad Khik” help men to attract good fortune (and also make them irresistible to the ladies) so Thai men commonly adorn one while gambling.

This revered penis amulet is said to have originated in India before being imported to Thailand by Cambodian monks. They can be made out of bone, wood, horn or metal, can be a few inches or a few feet long and come with all kinds of inscriptions and designs. Grab a Palad Khik on your next trip to Bangkok or Phuket and let it work its magical powers.

You know those plastic waving cat figures you often see on countertops, car dash boards or tattooed into the calves of hipsters? More than just being adorable, in Japanese culture these cats (known as maneki-neko) are believed to bring great fortune. 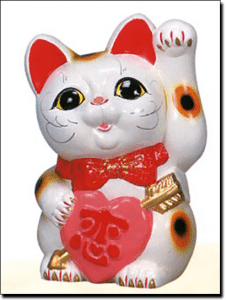 Sometimes referred to as fortune cats, money cats or lucky cats, the maneki-neko first appeared in Japan around the Edo period and continue to be used in Japanese shop fronts and businesses to welcome customers and conjure up good luck.

These days, many online gamblers in Japan keep one of these auspicious figures close by to their computers, hoping that this grining cat will bestow them with good luck when gambling.

The Japanese also have some bizarre beliefs surrounding spiders. According to Japanese folklore, if you see a spider in the morning you shouldn’t kill it as it’s a sign of good luck, however if you see a spider at night it’s a bad omen and you can go ahead and kill the sucker.

So if you find a spider in your house when gambling online, the time of day it appears and whether you kill it will apparently make all the difference to your chances of hitting the jackpot.