Software developers and Internet casinos could now be looking towards projects made possible by crowd funding campaigns, including the Virtual Reality Headset Oculus Rift, as potential new gaming platforms.

Crowdfunding has allowed some of the most interesting inventions to be created that wouldn’t have necessarily be picked up by large corporations if it wasn’t for individuals bringing their ideas to life. This has included Oculus Rift.

Created by Palmer Luckey, who presented his idea on the crowdfunding website, Kickstarter, Oculus Rift rapidly gained funding and popularity. The project was then purchased by Facebook in 2014, and now a consumer version is set to be released in 2016.

With this has come the potential for online operators and software developers to potentially create a casino experience for this wearable technology, but whether or not it will be a real money experience, or just a simulation only, it is hard to say. Regardless, we are sure it will have a large impact on the iGaming industry.

A virtual reality is something that sounds incredibly futuristic, but once upon a time so did the Internet. The Oculus Rift aims to bring a 360 degree virtual reality to your eyes just by wearing a headset. With the inclusion of headphones, games and video display are created to feel real. 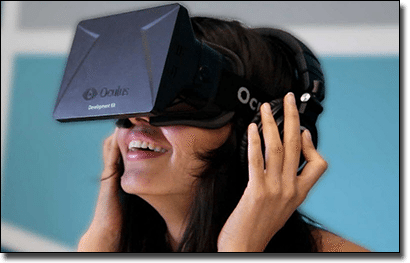 The initial start-up fund saw $16 million raised on Kickstarter for the project and was purchased by Facebook for $2 billion. While developers, for games and other applications for the wearable technology device, have their hands on the developer versions, Oculus Rift will be released in the first quarter of 2016.

The prototype has a seven inch screen with LCD projection to create complete immersion. With the developer kits, software developers including those in the online casino industry have had the chance, and continue to have the chance right up until the release and beyond, to create games for the virtual reality headset.

Oculus Rift specifications
The technical specifications for the Oculus Rift Development Kit 2, which is the latest release for developers by Oculus Rift, features a higher resolution of 960×1080 pixels per eye (it was originally 640×800 pixels), as well as a list of new innovative features including;

With app developers having the chance to create VR games and apps before the release of Oculus Rift, there have been some interesting, and exciting developments that give a unique future for online casino gamers.

While the potential is great for iGaming software developers, only one company, that we know about, has jumped on the opportunity to create a VR of a casino experience for the headset.

Lucky VR
Lucky VR have taken notice of the potential impact Oculus Rift can have on the gambling realm and have acted fast. The company which is owned by entrepreneur Jeff Lande, who has been involved in many ways in the iGaming industry for over 10 years, has already released Riftsino, the first virtual casino designed app specifically for Oculus Rift. Riftsino sees a 360 degree view of a virtual casino, which plays can ‘wander’ around and play casino games such as blackjack and the pokies.

Since Oculus Rift is only available for developers until 2016, Riftsino has been released for PCs and Macs in a demo version for consumers to check out. We took a look to see what we could expect and found that while it doesn’t offer the level of immersion that the headset platform will offer, it is still interesting to view.

We also found that the VR casino and games are all animated, which has us skeptical with regards to the level of immersion as it isn’t a real life experience, and it may detract from the whole VR innovation in the first place. Additionally, Riftsino is also only offered in play money mode.

However, it is in its early stages of development so Lucky VR could still make a real life virtual reality experience including live human dealers and, depending on legislation, it could be available to play in a real money mode.

While we have Riftsino to look forward to once Oculus Rift is released in 2016, the potential for real money casino games is quite high, but we foresee that it ultimately depends on legislation.

While smartphone and tablets, such as Apple and Android portable devices, are quite different to Oculus Rift and not just because they aren’t wearable tech, they were still a potential new platform for real money casino games. However legislation was quick to prevent the development of real money apps for this platform.

We can still access casino games at our recommended online casinos via our smartphones and tablets, but these online casinos and software developers can’t create native apps due to legislation, which could also occur to Oculus Rift apps.

While we suspect online operators and software developers are definitely keeping an eye on the potential of the Virtual Reality market, it will ultimately come down to whether or not they will legally be able to create and offer real money apps and games for the Oculus Rift headset.

Pros and cons of gaming on virtual reality headsets

The concept of creating a virtual casino, easily accessible from the comfort of our own home, is definitely a unique one, but like all platforms we play casino games on there are both advantages and drawbacks.

Software developers such as Microgaming, Net Entertainment, Play’n Go and more, are most likely keeping an eye on the potential impact that the Oculus Rift platform may bring in the iGaming industry.

Since many software developers offer live dealer titles, each with the hopes to offer a real casino experience, it is a possibility they will most likely develop an Oculus Rift app version of their casino to further that experience. However, it will ultimately come down to legislation and whether or not the Oculus Rift is received well by consumers.

While Oculus Rift has given developers the chance to create apps and games prior to the release, we suspect online software developers may wait and see what consumers think of the VR headset as it wouldn’t make much sense for them to develop games for a headset which consumers do not enjoy.

So while we may not be seeing many apps or games released for the Rift from the top leading software developers in the gaming industry, this may just be because they are waiting for the market’s reception to the headset, as well as whether or not legislation will change to prevent app developers from creating real money casino games for this new platform.

For now we can look forward to both the release of the VR headset in early 2016, which we can then officially try out the virtual casino simulation, Riftsino.