5 Card Draw and 5 Card Stud are two separate poker games, and while there are definitely some similarities between the two, there are also some distinct differences. It’s important players understand the difference between these two poker types before entering into a game, otherwise you may find yourself quite confused when the first deal is not what you were expecting.

Like other poker variations, the aim of both 5 Card Draw and 5 Card Stud is to make the best hand out of the cards you are dealt, with the winner receiving all the bets in the pot. The betting options are the same, with both games consisting of an ante (the minimum amount required to play) followed by the choice to fold (surrendering your hand), check (placing a zero bet but staying in the game), call (matching the current bet to stay in the game) or raise (increasing the bet amount and staying in the game).

It is the small differences regarding the deal and gameplay format that separate these two games apart.

How to Play Five Card Stud 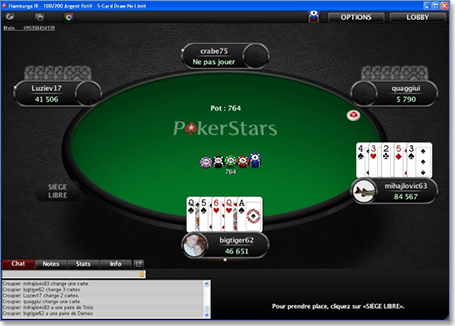 Amount of Players – two to 10 players

The Five Card Stud Difference – players are only dealt two cards to start with, building their way to a five card hand if they manage to stay in the game. Players do not have the choice to exchange cards and must make the best hand possible out of the cards they are dealt.

1. To enter the game, each player must place the forced ante bet. All bets are placed into the pot to become the winning prize for the game.

2. The dealer gives each player one face-up card and one face-down (hole) card.

3. The player with the highest face-up card begins the first betting round (in the case where two players have face-up cards of the same value, betting starts with the player closest to the dealers left). Players have the choice to call, check, raise or fold.

4. Remaining players are dealt a third face-up card and the player to the left of the dealer begins the next betting round.

6. All remaining players reveal their final hand and the player with the highest valued five card hand is the winner, taking home the pot. If only one player remains in the game they are excused from revealing their hole-card.

How to Play Five Card Draw

The Five Card Draw Difference – players are dealt with five cards from the get-go and play with a complete five card hand. They also have the choice to exchange less desirable cards in the hopes of making up an improved hand.

1. To enter the game, each player must wager the forced ante bet. All bets are placed into the pot which becomes the winning prize for the game.

2. The dealer starts with the player at their left and gives each player five face down cards. Players can then look at their cards.

3. The player to the left of the dealer starts the first betting round. Players have the option to call, check, fold or raise (note that on the off chance that all players fold during the first betting round, the pot simply remains as it is and new cards are dealt, with each player required to place a new ante bet).

4. Players are now given the choice to swap cards in the hope of improving the value of their hand. Each player must specify how many cards they wish to exchange and hand over the ones they want to swap. Discarded cards become the deck, which is shuffled and dealt so that each player once again has a five card hand.

5. Upon receipt of the new hands, a final betting round begins, with minimum and maximum betting limitations commonly doubled during this round.

6. All remaining players must now show their hands, which is known as the showdown. If only one player is still standing, they are the winner and need not reveal their hand. The player with the five card hand of the highest value is the winner and is rewarded with the pot.

The Internet provides card game lovers with the perfect platform to try out different poker variants, with several of our recommended online casinos and virtual gambling venues offering both 5 Card Stud and 5 Card Draw. Some sites will let you play these games in demo mode for free, so you can get the hang of both formats before betting any real money.

Playing five card poker online also comes with the added benefit of much more lenient betting limitations than you’ll find in a bricks and mortar casino, so even if you have a smaller bankroll you can still join the fun. Head to one of our recommended poker sites and take advantage of sweet welcome bonuses for new players and see if you can pick a favourite out of 5 Card Draw and 5 Card Stud.