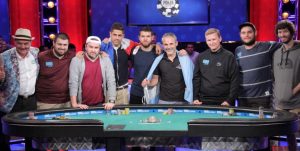 The table has been set for the 2017 World Series of Poker (WSOP) Main Event, with the event scheduled to air live in the US on ESPN at 9pm Thursday (although there will be a 30-minute delay on the broadcast due to gaming regulations).

The Main Event will be the first one in WSOP history where two players will be appearing at the table for the second time. French player Antoine Saout took a seat at the Main Event back in 2009, while American Ben Lamb made it to the final nine in 2011. Both players finished in third place during their time in the finals.

Rather than taking place in November like usual, the Main Event is running from July 20th to 22nd, just days after the final nine were left at the table on Tuesday morning. Here’s a look at this year’s final table by seat position:

While it’s disappointing that no Australian made the cut, we were pleased to see that Aussie player James Obst won his first gold bracelet in the $10K razz tournament.

With a tournament buy-in of $10,000, each player will walk away with a minimum of $1 million in prize money, with the final table paying out the following:

The 2017 World Series of Poker started on July 8th, where 7,221 players flocked to Las Vegas to sit under the bright lights and try their luck at the biggest poker tournament in the world. This year’s tournament set the record for the biggest single day starting field and the biggest number of players making the money for the Main Event.