The Battlestar Galactica television series ran from 2004-2009 and followed the exploits of an old military spaceship in their search for the rumoured oasis, known as Earth. When the show came to a well-rounded end in 2009, it left many fans still craving more action from the team. That’s where the wizards down at Microgaming stepped up to the plate and produced an action packed, sci-fi online slot based on the hit show.

How to play Battlestar Galatica

Battlestar Galactica by Microgaming is a 243 ways online slot with a minimum bet of $0.30 per spin and a maximum bet of $15. This spectrum of betting ability is a little restrictive to those whose wallets are fat and whose pockets are deep. The high roller’s may find the relatively small maximum on offer a little stifling.

Battlestar Galactica sets itself apart from every other online pokie on the market by creating a unique, multi-layered gaming experience. It boasts three distinctly different playing modes as well as a randomly triggered bonus, several different features and a ranking system. With each spin a ranking bar at the bottom of the playing screen increases. Once the bar is full your rank increases. With each new rank comes newly unlocked bonus footage and images from the show itself. 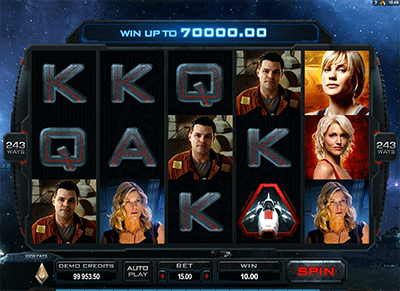 In descending order of value the symbols are as follows: Starbuck, Apollo, Baltar, Six, Col. Tigh, Helo, Ellen, Tyrol, Ace, King, Queen, Jack and 10. The Battlestar Galactica insignia acts as a wild which substitutes for any symbol, except the scattered ship symbol and the timer symbol.

Any three or more scattered ship symbols triggers free games, either 15 or five, depending on which playing mode you are in at the time. The countdown clock appearing on reel three during run mode triggers another feature.

As previously mentioned, there are three very distinct playing modes during Battlestar Galactica.

Normal mode plays like any other 243 ways online pokie with a maximum jackpot of 70,000 credits. It has a serene space background and soothing, calm background music. Any three or more scattered space ship symbols triggers 15 free games. Free games cannot be re-triggered in normal mode. The randomly triggered ion storm can only occur during normal mode.

During normal mode the Battlestar Galactica Wild insignia can appear stacked on reel one during paid and free games. Run mode can occur randomly any time during normal mode.

Run mode has a green background and during paid games pays left to right as well as right to left, essentially turning the game into a 486 ways pokie.

During run mode if you are lucky enough to spin a countdown symbol on reel three another feature is triggered. During this feature all Ace, King, Queen, Jack and 10 symbols are rendered blank, while the countdown symbol runs through all possible symbols before slowly stopping on a random symbol. All of the now blank symbols become the mystery random symbol and an additional win is paid accordingly.

Fight mode can randomly occur only during run mode.

Fight mode has a red background and battling space ships can randomly turn any symbol into a wild symbol or a double wild symbol.

Battlestar Galactica is a cracking game which recreates the action and drama of the teevee show perfectly. The different playing modes, features, bonuses and ranking system ensure that you will never experience a dull moment while playing this game. Loaded with different playing modes, action sequences from the show itself and bonuses galore, Battlestar Galactica is one of the most loaded games on the market.

Try Battlestar Galctica and over 1100 of the best real money online pokies games at SlotsMillion.com.