Razz poker is a common derivation of seven card stud. The run of play is the same, the betting rounds are almost identical, but there is one big difference: instead of the traditional hand rankings, this variant uses only the lowball poker hands. We’ll explain what that means, and show you how and where to play razz poker online.

What are Lowball Poker Hands?

Most online poker games use the ‘high hand’ ranking system to determine which player has the strongest set of cards. You should be familiar with these, as they also form the basis of Texas hold’em, draw poker and family card games like gin rummy. Starting with a single high card as the weakest hand, it then goes: pair, two pair, three of a kind, straight, flush, full house, four of a kind, straight flush and royal flush. 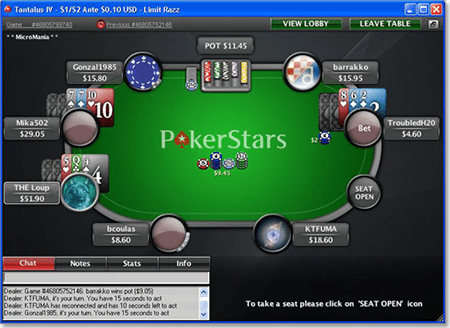 Then there are games like razz, where the aim is to avoid the above combinations and form the weakest possible hand. For example: a razz hand of 2 3 5 6 7 is much more valuable than A A A K K, as all cards are of low rank and it boasts no pairs, threes of a kind, or full houses.

There are a few different sets of low-hand poker rules, but the most common for razz is ‘Ace to Five’ or ‘California lowball’. In this system, the Ace is the lowest-ranked card and flushes and straights are ignored, meaning the best hand is a Five low (5 4 3 2 A, also known as the ‘wheel’ or ‘bicycle’).

Unlike Omaha hi/lo or stud hi/lo poker, where players can only qualify for the low half of the pot under ‘Eight or better’ rules (i.e. all five cards must be ranked Eight or lower), razz sets no such limitations on which cards can feature in your hand. Thus, a player could feasibly win with a pair of Kings, whereas in high/low poker you would usually need Eight low just to qualify.

The worst eligible hand in razz is the full house, which you would only ever be stuck with by drawing a four of a kind and a separate three of a kind in the same hand (e.g. A A A A K K K). The next worst is a two pair, as there is no situation where you would play three of a kind as your lowest hand, and then a single pair. After that, all hands are ranked by their highest card – so K J 10 8 6 is King low, Q 7 6 5 4 is Queen low, and so on.

Hands of the same type are ranked according to which has the lowest kicker. For example: 6 4 3 2 A (Six-Four low) would beat 6 5 3 2 A (Six-Five low), as it has a lower second-high card than the other. If the two highest cards are the same in both hands, the third-high card becomes the kicker; if the first three cards are the same, the fourth is the kicker; and if the four highest cards are identical, then the lowest card determines the winner.

The gameplay rules of real money razz are almost exactly the same as those of standard 7 card stud hi. The only difference, besides the use of only the low hands, is how the betting order is decided at the start of each round.

The rules and gameplay of Razz also form an element of popular card game, HORSE.

The easiest way to learn razz and other lowball games is to jump online and sign up at a respected Internet poker room. Secure gaming sites like PokerStars.com and FullTilt.com run hundreds of free razz tables every day, so you can get familiar with the game and work on your strategy without having to risk a single dollar. Once you’re comfortable, you can then deposit some real cash into your account and indulge in the thousands of ring games, sit-and-go tables, scheduled tournaments and satellite events running all week long, all year round at Poker Stars, Full Tilt Poker and 888 Poker Australia.