While hard to find at land-based casinos nowadays, red dog remains a favourite among online gamblers who don’t mind straying away from blackjack and roulette every now and then. We’ll show you how this simple, quirky card game works, as well as where you can play it on the Web for real cash.

How to play red dog 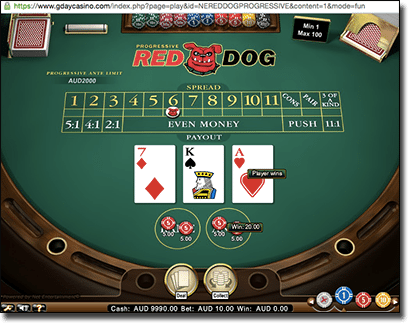 Also known as yablon, red dog is a three-card table game where the player wins if the final card’s rank falls in between that of the first two. It is played with up to eight standard decks, with all cards following traditional poker rankings. Suits are irrelevant and Aces are always high.

The game is played on a table featuring two betting boxes and a spread layout. Before the hand is dealt, the player must first place a wager in the ‘Ante’ box. The croupier then deals two cards face up. At this stage, there are three possible scenarios:

When there is no tie or three of a kind, the first two cards set the spread. This refers to the number of winning cards available to the player and determines the payout odds. For example: Six and 10 makes a three-card spread, as the player can win with a Seven, Eight, or Nine. The smaller the spread, the higher the payout. The standard rates are:

Before the third card is revealed, the player has the option to either stand with their initial bet or increase the stakes by placing an additional wager in the ‘Raise’ box. Once the decision is made, the final card is played. If it doesn’t fall on the spread, the house wins; otherwise, the player wins at the payout odds listed.

There is only one aspect of this game over which the player has any control: Whether or not to raise after the initial deal. If you crunch the numbers, you will find raising the bet only has a positive expectation on spreads of seven or more cards. So the strategy is simple: only raise when the spread is at least seven cards.

Where does this leave the house edge? Depending on how many decks are in play, the casino’s advantage on red dog can vary from 2.75 per cent (eight decks) to as high as 3.16 per cent (single deck). More cards not only means a lower house edge, but also a lower element of risk for each unit wagered. This is the opposite of blackjack, for instance, where playing with fewer decks increases the player’s expected returns.

As we said at the top, real money red dog games have become a common alternative to the more fashionable card options at online casinos. Here are the leading digital variants available at our top-ranked online gambling sites.

BetSoft Red Dog – Like so many of BetSoft’s instant play casino games, this version provides decent value in a straightforward and easy-to-use package. It features eight decks, which brings the house edge down to 2.75 per cent, while a $1/$100 bet limit gives room enough for most casual punters.

NetEnt Red Dog Progressive – The key aspect of Net Entertainment’s single-deck red dog game is the progressive betting feature, which allows you to keep your winnings on the table for the next hand. The game’s help file claims a theoretical return of 97.24 per cent, but we believe it to actually be about 96.84 per cent.

Microgaming Red Dog – Available at most Microgaming casinos, this is one of the oldest and simplest versions of online red dog going around. A single 52-card deck and a standard payout scheme combine for a relatively high house edge of 3.16 per cent.

You can enjoy red dog and many other casino card games at our approved online casinos for our Australian and international readers, listed in the table at the top of this page. The rankings are geo-targeted, meaning they will only show the best online casino sites accepting players from your country. Each of our featured gaming sites uses only the best casino software providers, meets all requirements for licensing and security, and supports a wide array of deposit options.