The Incredible Hulk is a pokies collaboration between Playtech and Marvel Comics, inspired by the famous story of Bruce Banner and his radiation experiment gone awry. The game offers multiple bonus features, including free spins, a bonus game and a four tiered progressive jackpot that can skyrocket into the hundreds of thousands of dollars. Find out how and where to play The Incredible Hulk for Australian dollars at the best online casinos.

How to play The Incredible Hulk

The Incredible Hulk is a five-reel Playtech pokies game that comes in two formats – a 25 payline version and a 50 payline version. Both are available for instant-play directly over your Web browser and via downloadable software at one of our leading pokies sites, Casino.com. Being a progressive jackpot game on the linked Playtech network, real money bets are required to play. Casino.com accepts AUD deposits in such trusted payment methods as Visa, MasterCard, Neteller, Skrill and Paysafecard. 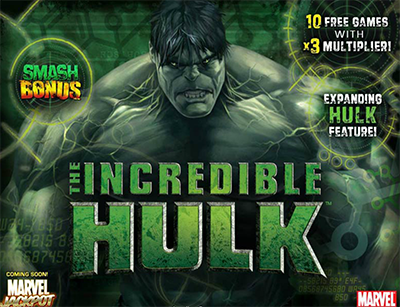 There’s also an optional auto-start feature where the computer can automatically play up to 99 spins on your behalf. 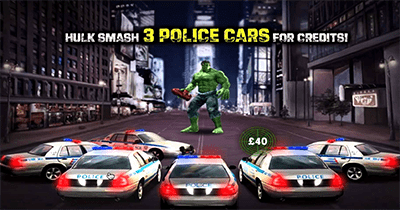 The symbols in The Incredible Hulk are based around the 2008 movie starring Edward Norton. There’s police cars, choppers, toxic waste and radiation warnings, all seeped in a green haze. The Hulk himself acts as the games wild symbol, turning into an expanding wild when landing in the centre of reel three, or anywhere across reels two, three and four. The wild can also substitute all other symbols to form a winning combination except for the scatter and bonus symbols.

Free spins are triggered by an appearance of three or more of The Incredible Hulk logo scatter symbols anywhere across the reels. You’ll receive 10 free spins, with all wins tripled. The Expanding Hulk can also appear during free spins, with a 3X multiplier, and free spins can be re-triggered infinitely.

The Smash Bonus is a fun mini game that has more in common with a video game than a pokies game. Triggered by an appearance of the Smash Bonus symbol on reels one and five, you’ll be taken to a separate screen where The Hulk stands ready to fight against a swarm of police cars and helicopters. The aim is to try and smash the vehicles to win prizes. Smash three out of the seven police cars to win cash, and one out of the three helicopters to win a multiplier. The Hulk Rage feature can randomly be triggered during the car smash bonus, automatically smashing all seven cars for some huge wins. 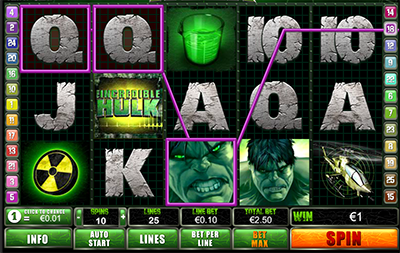 The Incredible Hulk is linked to Playtech’s Marvel progressive jackpot network, which features many other comic themed pokies like X-Men, Thor and Wolverine. These games are wildly popular, with the jackpots soaring fast every time a player places a real money bet on any of the Marvel games within the linked network. The progressive jackpot has four separate jackpots, starting with these base amounts:

The current amount of the progressive jackpots will be listed at the top of the game when you’re playing for real money bets.

The jackpot bonus game can be triggered at random any time after a winning or non-winning spin. When activated, you’ll be taken to a screen showing a grid of 20 facedown squares, similar in format to an online scratchie. Click the squares to reveal the jackpots lying underneath – once you’ve matched three jackpots, you’ll win the current amount of that corresponding jackpot. The higher your wager is, the higher your chances are of triggering the progressive jackpot bonus.

CasinoSites verdict on The Incredible Hulk

As far as online pokies go, The Incredible Hulk has it all – great graphics, mini bonus games, and a progressive jackpot that has the potential to change your life. Everything Marvel touches turns to gold, and this game is no different. During our testing, the bonus features were tough to trigger, but will be well worth your while when luck is on your side. This is a must-play game for all comic book fans and those chasing the giant wins.

Get started at Casino.com and play the Incredible Hulk pokies game. Available on both PC, Mac and smartphones. Claim a AU$400 bonus