Thunderkick’s exhilarating new slot, Zoom, is all about stacked symbols, expanding reels and free re-spins. Played across a monstrous 64 paylines, Zoom blends the classic formula of a three-reel fruit symbol slot with the six-reel style of modern online pokies games.

Where to play Zoom pokies by Thunderkick

It might lack a lengthy free spins bonus round, yet its six-square design makes for a unique experience. Stylish visuals and a classic feel help make Zoom an exceptional online slot game.

How to play Zoom

Zoom’s insane 64 paylines make it unique in the world of online slots. The paylines are actually divided into six boxes of four symbols each, called “Zoom areas”, with each box housing a potential “Z” zoom icon, which expands and takes over the whole box. There’s the potential for a big payout when that happens, with a minimum bet of $0.10 and maximum of $100 dictating the size of the win.

The specifics for the game are as follows: 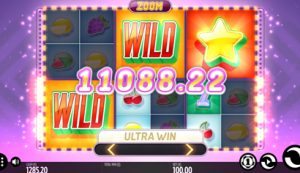 Zoom’s design is almost too simple, but it’s hard to fault the game too much due to its unique structure and exciting re-spin feature. Thunderkick’s pokies games are generally light on theme excitement, instead focusing on gameplay basics and big payouts. We can’t fault that here. 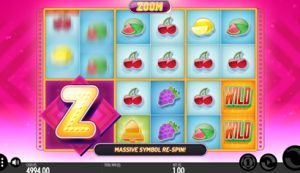 Zoom is played across 6 reels and 64 paylines. There’s the potential for Wilds and expanding Zoom symbols on every spin, keeping the RTP at a respectable 96.2%, although it’s lower than Thunderkick’s other recent outing, The Rift, which had an RTP of 96.3%. Zoom is a completely different game, however, and also offers 1,500x the player’s bet compared to The Rift’s 500x return on the jackpot.

Each spin in Zoom is played just like any other pokies game, but the outcome is rather unique. The paylines are divided into six “Zoom” areas, each with four symbols (2*2). Each area can contain one “Zoom” symbol, which expands into a “Massive Symbol” and takes over the entire square for the duration of a single re-spin. There are no free spin “rounds”, but you can work up as many as six free re-spins if you land a Zoom symbol in each square on consecutive spins. Landing on four Zoom symbols in adjacent squares will create a Super Massive Symbol, and as you can imagine this can lead to some huge payouts. Where to play Zoom

You can play Zoom at many of our recommended sites, which all host Thunderkick online pokies software. All are verified by industry watchdogs like eCOGRA, are safe and regulated for player deposits, and have hundreds more pokies on offer from Thunderkick and other game developers.

Zoom is a unique game that might lack much in the way of bonus rounds and free spins, but makes up for it with huge paylines, expanding symbols and a massive jackpot multiplier of 1,500x your initial bet. You’re aiming for those Zoom Massive Symbols, which can land on any of the symbols including a Wild, so there are certainly big payouts waiting for you. Its simple design might deter players look for something a little more elaborate with more bonus rounds and free spins built in, but Zoom can still find ways to reward with its expanding “Zoom” symbols feature.