If you want an online casino game which requires a bit of skill and offers a low house edge, real money video poker is a great way to go. There are hundreds of variations out there, but which ones are the most popular?

All the games we mention here can be played for real Australian dollars at our top-ranked online video poker casinos. Just click on one of the recommended sites above, take a moment to register and cash up your account, and enjoy some of the best video poker the Web has to offer.

With simple rules, straightforward strategy and a very manageable house edge, Jacks or Better video poker is far and away the most popular variant on the Web. As a core game upon which most other VP titles are based, it can be found at every one of our trusted online casinos. 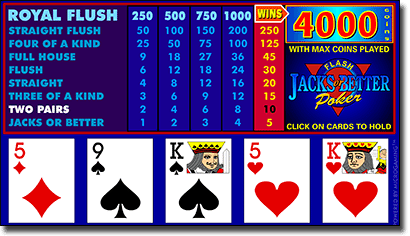 The defining feature of Jacks or Better poker is all in the name. In order to win a payout, you must draw at least a pair of Jacks; anything less, and you lose your bet. So while a pair of Jacks, Queens, Kings, or Aces wins at 1 for 1 odds, a pair of Tens or lower gets you nothing.

Another signature is the 4000 coin jackpot on the royal flush. When betting between one and four coins per hand, the royal pays 250 for 1; but when you bet the maximum five coins, that return jumps up to 800 for 1. Always look for this feature, as it takes a big chunk out of the house edge.

Not all Jacks or Better games are made entirely equal, however, as many developers make slight alterations to the pay chart which can greatly affect the casino advantage. The most common is to deviate from the standard 9/6 system, where full house pays nine coins and flush pays six. A lot of games switch these for an 8/5 payout, which knocks the house edge up by around 2.2 per cent – more than four times the original figure of 0.46 per cent.

Some online Jacks or Better poker games use different methods to gain a sneaky extra advantage. For example, the table below illustrates the difference between the Microgaming and Net Entertainment versions, both of which are widely available at the best Australian video poker sites. (Note that all payouts are listed per coin for a maximum five-coin bet).

Although they are not easy hands to draw, the shorter pays on the straight flush and four of a kind in NetEnt Jacks or Better raise the house edge to 1.75 per cent. Thus, we always suggest looking for a full pay Jacks or Better game, as found at Microgaming video poker sites such as RoyalVegasCasino.com.

But these facts and figures mean very little if you don’t know how to play the game properly. Jacks or Better strategy charts are easy to find – a quick Google search will turn up hundreds of results – and they don’t require a mathematics degree to follow. Learning and repeating this set list of plays keeps the house edge to a minimum by ensuring you make the best possible move every single time.

In terms of popularity and availability at Australian casino sites, Joker Poker ranks second only to Jacks or Better. There are dozens of variations, but the basic premise is always the same: the Joker, added to the standard deck of 52, can substitute for any other card.

Because that additional wild card makes it easier to play for those high-paying hands, the Joker Poker pay chart features some significant deviations from the standard Jacks or Better format. The minimum hand is usually a pair of Kings or better, while that extra card makes it possible to draw five of a kind or a wild royal flush. It also requires a more complex strategy, with all moves dependant on whether or not you have a Joker in your initial hand.

While some land-based Joker Poker machines have been known to pay out around 100 per cent, online versions tend to offer a bit less value compared to other titles. Here’s how the standard Microgaming, Net Entertainment and BetSoft incarnations stack up against one another:

Deuces Wild poker is popular for a number of reasons. For one, it’s a fun variation where all the Deuces are wild cards, which creates interesting new possibilities – such as the wild hands seen in Joker Poker. For another, it is one of the most accessible Jacks or Better variants on the market, especially at our recommended online video poker casinos.

Most of all, though, Deuces Wild has a long-held reputation for offering better odds than any other real money casino game. For many years, you could find land-based DW video poker machines which returned at around 100.8 per cent. That means, in theory, a skilled player would beat the casino in the long run – a very rare luxury on any gaming floor.

However, with the advent of Internet gambling and free video poker strategy tutorials, such user-friendly games are all but extinct nowadays. In fact, you have to be careful and choose wisely if you want to get the most out of an online Deuces Wild game.

For instance, Microgaming runs two versions: the standard single-play option, and the multi-hand Deuces Wild Power Poker. As the numbers below show, one title is decidedly better value than the other.

So if you want to play real money Deuces Wild poker online, make sure you pick the Microgaming Power Poker version. Otherwise, you will be giving away up to $2.61 out of every $100 you bet, and that adds up very quickly.

As with Jacks or Better poker, Deuces Wild strategy charts can be found pretty easily on the Web. However, you need to make absolutely certain you have the right strategy for any given pay chart. Non-standard payouts can have a huge impact on ideal strategy, so you need to make sure your play rankings are calculated specifically for that game’s pay scale.

All Aces is not quite as well known as some of the other Internet video poker games we’ve covered here. However, players in the know will recognise that this is one of the best online casino games out there.

On the surface, All Aces video poker is quite similar to Double Bonus. It offers a number of improved payouts for various fours of a kind, as shown here on the Microgaming pay tables for each:

Normally, we would advise players to avoid games which offer reduced payouts on common hands like two pair, straight and flush. However, the four of a kind bonuses in All Aces video poker are so substantial that they bring the house edge down to just 0.08 per cent – lower than any other Internet casino game we’ve seen.

On the flip side, All Aces strategy can be difficult to master because it requires you to play against your intuition in certain situations (e.g. holding Aces rather than playing for a royal flush). This is the case for most of the Bonus Poker relatives, however, and you can always refer to a strategy chart for the trickier plays.

The titles above make up just a small fraction of the video poker variants available at the best online casinos. If you want even more options, the leading software providers make versions of all these popular formats as well:

Most of these releases are included in the Microgaming Power Poker series, which allows you to play upwards of four hands per round. We also like the unique BetSoft Pyramid Poker games at GDayCasino.com, where you can earn extra payouts based on your first three or four cards. Whatever tickles your fancy, you’ll find it at one of our top-rated real cash casino sites.