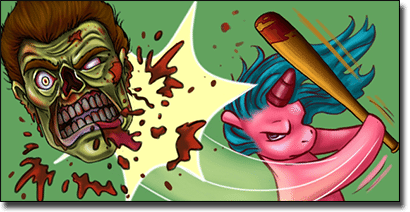 To celebrate the release of the hilarious, action-packed new pokies game from software developers Genesis, Slots Million is giving players the chance to win up to 100 free spins daily for the next week – that’s 700 free spins all up.

Starting Monday October 5th, playing the new slot game Machine Gun Unicorn for real money will reward you with more free spins the more you wager until Sunday 11th of October. Free spins will be automatically credited to your account and can be used on a selected number of popular NetEnt pokies titles.

With a game as innovative and entertaining as Machine Gun Unicorn, it’s not like you really need another incentive to play, but the lure of free spins certainly does help. This Genesis game uses one of the more bizarre pokies themes we’ve seen recently, where a mix of whimsical unicorns, ponies and dragons shatter their cute stereotypes by getting their magical hands on whatever weapons they can in order to defeat an influx of gruesome zombies.

Think The Walking Dead meets My Little Pony, but if the ponies were complete bad-asses with a taste for violence and destruction. Need we say more? 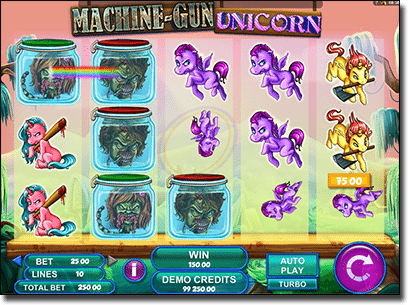 This blend of fantasy meets horror is more than just entertaining, the game also offers some pretty hefty chances to win, with up to 200X your active bet up for grabs during the bombs feature. If the games wild, the Machine Gun Unicorn symbol (the blue unicorn that literally has a machine gun where its mystical horn should be) makes an appearance on the third reel then all zombie head symbols currently appearing anywhere across the reels will explode.

This is your biggest chance to see your credits roll up, with blood and guts splattering all over the screen as your winnings sky rocket. On the unfortunate off-chance that there are no zombie heads on the screen when the Machine Gun Unicorn appears, you’ll still be awarded a special credit for your efforts.

Genesis is a new gaming software developer on our radar and while the graphics and animation may not be as highly advanced as releases from big names like Microgaming, NetEnt and BetSoft, Machine Gun Unicorn is so much fun that we’re really keen to see what other Genesis games roll out at Slots Million.

In the meantime, give Machine Gun Unicorn a try and earn yourself up to 700 free spins on top of any zombie exploding wins you rack up along the way.

You can try Machine Gun Unicorn at Slots Million for free in demo mode, but to take advantage of the free spins promo a real money account is required.

If you love to play the latest pokies releases from Net Entertainment, one of our favourite premium gaming software developers, we recommend signing up at BetOnline Casino. Players from United States can redeem exclusive sign up bonuses, free spins, and other cash goodies while enjoying Machine Gun Unicorn and the hundreds of other high-quality games from NetEnt’s massive catalogue.