While you’ll find pokies in the hundreds at online casinos, mobile casinos are reserved for a smaller selection of some of the desktop site’s best games. Mobile gaming technology only started to emerge recently, so software developers are rushing to keep their fingers on the pulse of emerging technologies in order to optimise their games for mobile play.

More mobile pokies seem to be appearing every day and it’s not hard to imagine a day where a desktop casino’s entire slot catalogue makes it to the mobile sphere, but for now, here’s a list of some of the best mobile pokies you’ll find at our recommended casinos, available to play on iPad, iPhone, Samsung Galaxy, Windows Phone and most mobile makes and models. 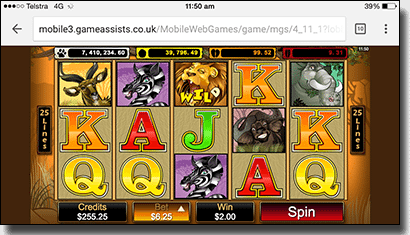 Microgaming’s Mega Moolah is the most popular progressive jackpot slot game on the Internet, and arguably the world’s most popular online pokies title. While the game is fun and vibrant, it’s not so much the graphics or gameplay features that is the big draw card here, but the fact that Mega Moolah has created the biggest record breaking pokies winners in online history.

Featured on a network of casinos, the progressive jackpot is constantly growing at a rapid pace and has reached astronomical heights in the past. The mobile optimised version is easy to use and secures your place in the jackpot draw even when you’re on the move.

Mega Moolah can be found at most mobile casinos including Microgaming powered sites like www.RoyalVegasCasino.com.

This is one of the latest and greatest games from the big up and coming name in online pokies software, Thunderkick. Esqueleto Explosivo is one of the most creative, unique slot games on the market and is unlike anything you’ll find in a land based casino.

The beautifully designed Mexican themed game follows sugar skull Enrico Mortis and his mariachi band The Boners as they celebrate The Day of the Dead in true fiesta fashion. The mobile version is perfectly optimised, maintaining all the fine detail featured in the desktop version and is a testament to Thunderkick’s strengths as a big player on the scene.

If you’re playing Esqueleto Explosivo in public be sure to bring your headphones, as the awesome sound track and hilarious sound effects are half the fun. You can play this legendary game for free or real money bets at www.Slots Million.com‘s mobile casino.

Mr Vegas is part of BetSoft’s Slots3 collection which consists of the best 3D pokies available online. Given the epic level of detail and cinematic quality animation, BetSoft’s games are admittedly better on a bigger screen, so you may want to try the mobile version of Mr Vegas on a tablet rather than your smartphone.

Mr Vegas is one of the Slots3 standouts, bringing all the excitement and glamour of Las Vegas to the reels with the charismatic and somewhat loopy character of Mr Vegas himself on standby to keep the action rolling. The bonus features alone are reason enough to try this game, but the fun 3D animation is the real drawcard.

Net Entertainment is known for bringing big names in cinema and television to life in pokies form, and South Park and South Park Reel Chaos are a couple of player favourites, the latter of which has made it to the mobile world.

In Reel Chaos your beloved foul mouthed South Park characters assume the position of superheros out to tackle the night, donning makeshift costumes with a dramatic soundtrack adding to the suspense. As though it wasn’t fun enough watching Cartman in his ridiculous get-up of The Coon vigilante character he created, there are more bonus features in this game then we have time to mention.

The mobile version is flawlessly crisp and clear and we wouldn’t expect anything less from the gurus at NetEnt. Give South Park Reel Chaos a spin on your smartphone or tablet at www.GDayCasino.com.

We were psyched when we found out that NextGen gaming had released a pokies version of the classic Universal Studio’s horror flick Psycho but even more pumped to find that the game had also been optimised for mobile play.

Psycho is a chilling game, made creepier by the edgy soundtrack, so this is definitely a headphones in kind of mobile slot, especially if you’re a lover of scary movies. Set alongside the famous Bates Motel, the reels are cartoon animated rather than pulled from the big screen, so if you don’t like suspenseful horror movies, just turn off the sound and enjoy Psycho for the fun graphics and chance to win big.

Psycho is available for mobile play at www.SlotsMillion.com.

Starburst is one of those classic video pokies that you’ll find at a majority of NetEnt mobile casinos and while there’s nothing especially innovative about this game, that’s half the drawcard. Starburst is an uncomplicated but visually incredible slot that uses Bejewelled Blitz like gems to create a colourful and engaging game that goes back to basics, with a serene soundtrack that comes to life when landing on a win.

It looks awesome on all mobile screens and the NetEnt Touch mobile software makes it easy to change the settings and increase your bets. The simplicity of the game makes Starburst an ideal choice for those boring public transport rides, or one to whip out when your friends are keeping you waiting.

The biggest television smash hit of the decade is also a major name in the virtual pokies circuit and given its popularity, you can now find Game of Thrones at most Microgaming mobile casinos including 32 Red and Royal Vegas. While the slot version sadly doesn’t include images of the real HBO characters, the theme is the same and the game captures the essence of all the GOT glory.

Game of Thrones pokies has two versions, a 15 line game and a 243-way game, featuring stacked wilds and a gamble feature, both of which look great in mobile form.

The above overview only covers a tiny fraction of the awesome mobile pokies available, some other must-try mobile slot titles include:

Given the browser based play format of our recommended mobile casinos, these games and many more can be played from a range of mobile devices on both iOS and Android operating systems with no downloads required.

BetOnline Casino gets our vote as the top-rated mobile casino site for players from United States, which has some excellent welcome bonuses available for new players along with a great range of mobile casino games to play on the go.