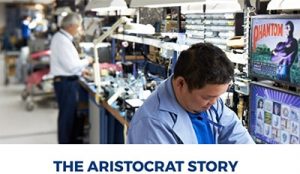 Media outlets are reporting that casino gambling companies are beginning to take an interest in the South Korean demographic as research reveals the country’s citizens are frequently visiting international casinos.

Aristocrat which creates popular titles such as Queen of the Nile, More Chilli, and Mr Cashman, revealed a new poker machine at the Global Gaming Expo in Asia last week which targets South Korean players. Known as “5 Kings” the Aristocrat Korean-centred electronic gaming machine’s theme was inspired by the country’s mythology.

The company based Down Under provides Asian nation casinos, including Vietnam and Macau – reportedly regular spots for South Korean punters – with real money poker machines. Aristocrat said it decided to create a poker machine which appeals predominantly to Koreans due to the increasing number of nationals visiting foreign casinos.

This is despite it being illegal for South Koreans to gamble at international casinos and upon return, citizens can be prosecuted.

South Korea’s Criminal Act “punishes a person who violates this provision by imprisonment of not more than three years or by a fine not exceeding twenty million won”.

While it rarely happens, it is not impossible with two prominent basketball players fined in 2016 for gambling in Macau when they returned home. They were also suspended by the Korean Basketball Organisation.

While this could be why the demographic has been overlooked for so long, one of the 18 casinos in South Korea does accept locals.

Known as Kangwon Land, the casino revenue accounts for more than half the country’s total gaming revenue, which is another reason why the pokies maker targeted the demographic for its new release. The casino has 1360 slots and video gaming machines, along with 200 tables – 72 of these are reserved for real money baccarat.

Aristocrat is just one of the many gambling manufacturers looking to South Korean gamblers. Sega Sammy has gotten heavily involved in the market by opening South Korea’s first integrated resort, Paradise City, in Incheon. It cost the company $1.2 billion.

The conglomerate based in Tokyo only accepts international visitors at its new gambling venue and hopes it will help facilitate a casino license in Japan, as it becomes the next new gambling destination.

It is likely there will be two casino licenses available in Japan but it’s not known if international or local developers will get them.

Players from United States can head online instead of venturing to a casino in the city, with BetOnline Casino being one of our favourite sites to play at.