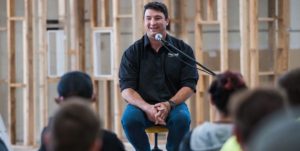 Clubs ACT is going to great lengths to make sure the community knows its organisation takes problem gambling seriously.

After a series of complaints were filed against multiple gaming clubs around Canberra for pokies violations, former NRL player Nathan Hindmarsh has jumped on board the Clubs ACT campaign to raise awareness about responsible gambling practices.

On Tuesday, Hindmarsh was in Canberra helping Clubs ACT launch its new five-point initiative for reducing problem gambling. The organisation wants to see territory wide exclusions for problem gamblers, a 280 machine cap in any single venue in the ACT, an ACT government appointed problem gambling intervention officer and a continuation of the current ban on poker machines from the Canberra Casino.

Hindmarsh, who formerly captained the Parramatta Eels and set the record for most games played with the club, spoke out publicly in 2012 about his six-year struggle with gambling addiction. His autobiography revealed he had lost close to $200,000 to the pokies over the years, after boredom first lead him to drift towards the poker machines to fill his spare time.

Clubs NSW now pays Hindmarsh to visit schools and other groups to speak about his experiences and spread the word about problem gambling. The main message he wants to get across is people should not be afraid to ask for help when they need it. He also believes it is up to the individual to gamble responsibly, and not the fault of the clubs offering the machines.

He believes Clubs ACT’s new initiative, which requires clubs belonging to the organisation to use badges to identify gambling intervention officers, will make a big difference. He said if someone had personally intervened during his gambling days, he would have been willing to seek help.

Hindmarsh said, “It’s a tricky one. Some days when I was on the machines if someone approached me I would have broken down and cried and said thanks very much for talking to me. Other times I would have said piss off and mind your own business.”

Gwyn Rees, chief executive of Clubs ACT told ABC Radio the harm minimisation initiative has not “come as a result of pressure” and has been in the pipeline since last year. He said, “The ACT is nation-leading in its harm minimisation approach and we’ve played very actively in this space.”

Many people aren’t aware that online casinos have all kinds of self exclusion policies and play limits in place to help online punters support safe and responsible gambling practices. If you’re an online player from United States you can find safe gambling services offered at secure online casinos like BetOnline Casino, with fully customisable time, loss and money limits able to be set.