Net Entertainment has just released its new Stickers slot, and has another one on its way.

While Microgaming usually gets all the attention for their new releases, NetEnt have stolen the show with their two new slots, known as Stickers and Neon Staxx, offering exciting features and high quality graphics all the while being accessed on our desktop and mobile devices.

While one has been released already, the other is set to hit our favourite NetEnt casinos at the end of this month.

Stickers was released at the end of May and has taken our favourite NetEnt casinos by storm, such as the following trustworthy sites;

While this is a video slot with high quality graphics, the symbols are reminiscent of the classic fruit machines featuring kiwi fruit, strawberries, oranges and more. Additionally, it features the Sticky Win feature which is seen in the popular NetEnt Jackhammer pokie machine. 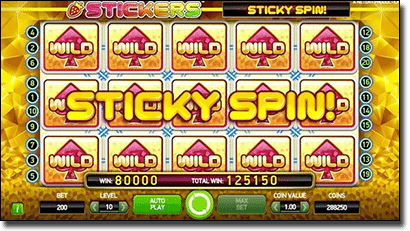 With 20 paylines over 5 reels, the Sticky Win feature sees a Sticky Wild appearing randomly to trigger regular wins and awards a re-spin instantly, even if the Wild didn’t contribute to a win when it appeared.

Stickers has been created for the HTML5 platform, as well as for desktop devices, and therefore smartphone and tablet players can try this slot out too. Interestingly, Stickers has been stated to be the first pokies from a long list which are set to be released via this technology over the course of the year.

Net Entertainment seem to be fond of a neon theme at the moment, with their exclusive Thrills casino game NRVNA featuring neon graphics, and now with their new Neon Staxx slot expected to be released June 24. 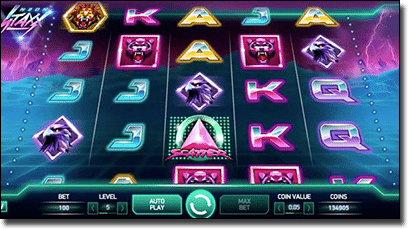 Neon Staxx has a 5×4 reel format similar to NetEnt’s releases earlier this year, including Spinata Grande and Dracula which have both been quite popular, and also has 40 paylines on offer.

Featuring 3D symbols illuminated by neon colours, Neon Staxx is set in the 80’s with the audio to match. There are unusual symbols which pay homage to those arcade games the 80’s were known for.

Players are treated to free spins and a bonus feature in this new pokies. The Neon Staxx Free Spins feature is activated by the Scatter symbols, but prior to players using their free spins a Super Stacked symbol will be chosen to deliver potential big wins during the free spins.

As mentioned above, the next collection of releases by NetEnt will be compatible with both desktop and laptops, as well as the HTML5 platform for smartphones and tablets, thus Neon Staxx will be too.

While we have a substantial list of trustworthy NetEnt casinos, all offering Stickers and soon to offer Neon Staxx, Slots Million is running a promotion this week (June 1 to June 7) for players to score free spins.

Every day for the first week of June, players can head on over to Slots Million and play their slot of choice to earn 100 spins. All you have to do is spin the reels 1000 times to land 100 free spins. You can do it everyday too, to earn more free spins.

With the release of Stickers we recommend trying the new pokie title at SlotsMillion.com in order to contribute to your required 1000 rounds and ultimately score yourself at least 100 free spins.