Win a trip to Germany for Oktoberfest with Jackpot City 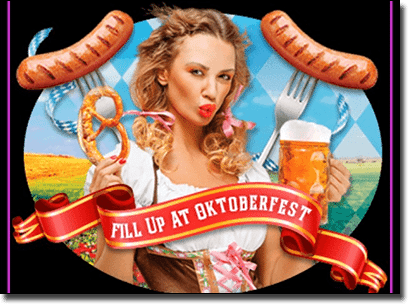 Experiencing the glory of Oktoberfest in Germany is one of those bucket list dreams that everyone should enjoy once in their lifetime, and thanks to Jackpot City Casino that dream is about to become a reality for five lucky punters and their partners.

From the first of June until the end of July, every deposit of $50 or more that you make to your Jackpot City account will grant you one ticket to the major prize draw. The grand prize is an all expenses paid trip for two to Munich, the home place of Oktoberfest, including return flights and accommodation.

Oktoberfest is one of the biggest and most loved festivals in the world, attracting six million visitors from across the globe every year. The 16 day fair happens annually in Munich, Germany from late September until early October and forms a big part of Bavarian folk culture.

Over the two weeks that Oktoberfest takes place, there’s music, side shows, amusement rides, stalls, dancing and food galore, with traditional German meals like pretzels, sauerkraut, knödel and bratwurst consumed by the truck loads. Of course we’re leaving the most important part til last; the beer.

Above everything else, Oktoberfest is famous for the beer drinking, with over eight million litres of the delicious nectar of the gods served each year. In short, Oktoberfest is a giant non-stop party full of amazing food, fantastic beer and fun filled cultural festivities, and now you can be a part of it all.

On the bizarre off chance that the idea of this trip doesn’t tickle your fancy, Jackpot City is giving the winners the choice to take the equivalent amount of $10,000 in cash instead.

All you need to do is deposit and play your choice of casino games at Jackpot City, with secure deposits available in AUD. During this promotional period you’ll also earn bonus points when playing Big Chef and Mega Moolah pokies. The winners will be announced on August 4th 2015 by phone or email, so make sure your contact details are up to date. Remember to check the terms and conditions of the promo as certain wagering requirements apply.

With new games recently added to Jackpot City’s slot collection, like Ariana, Penguin Splash and River of Riches you can play these new additions for real money while also securing your place in the draw for the trip to Germany.

Forget spending this Oktoberfest at your local pub drinking domestic beer and watching the dismal attempts of Aussies attempting to get into the German spirit; head to JackpotCityCasino.com now and make a deposit of at least $50 and this dream adventure could be yours.