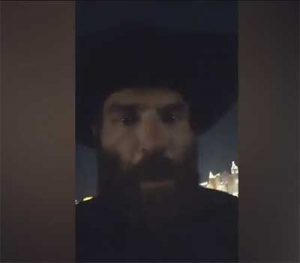 Professional poker player Dan Bilzerian was caught up in the biggest massacre in US history on Sunday evening at the Mandalay Bay Hotel and Casino.

Mr Bilzerian was enjoying the country music lineup at the Route 91 festival when a gunman opened fire from a hotel room above the event.

The 36-year-old had filmed an artist just moments before more than 50 people were shot dead. At least 500 festival-goers were also injured at the event when Jason Aldean was playing.

Self-titled the ‘King of Instagram’, Mr Bilzerian took to social media to film his version of events as he was running from the Las Vegas strip casino.

In several stories uploaded to Instagram, Mr Bilzerian can be seen breathing heavily as the sound of bullets spraying across the open-air event can be heard in the background. He then claims that he saw a woman get shot in the head in front of him.

“It’s so crazy, some kind of mass shooting. Guy had a heavy calibre weapon for sure,” he can be heard saying as he gasps for air.

Additional videos show him in a car driving, where he states that he is going to get a gun and head back. He’s then shown walking away from flashing emergency lights saying “I got one of the guys.”

The videos remain on his Instagram page, where he regularly uploads photos of his extensive gun collection along with pictures of half-naked women.

But not everyone is happy with his choice to film during the carnage.

A Medal of Honor winner and Marine Corps veteran, Dakota Meyer, has slammed Mr Bilzerian for filming during the horrific tragedy.

“Always playing ‘operator dress up’ and so, so tough when the cameras are on.”

Mr Meyer, who is the second youngest Medal of Honor recipient after the Battle of Ganjgal in Afghanistan, continued.

“A woman just got shot in the head and you are running away filming that’s not what operators do. Please stop trying to be someone you’re not,” he said.

“People are dying, you’re running away not helping them and pretending it’s worthy of a video is disgusting.

“This is why children shouldn’t classify heroes by their followers or their photos.”

The gunman responsible for the horrific events has been identified as 64-year-old Stephen Paddock, although a motive is not yet clear.

As more details come to light, it appears the lone gunman spent tens of thousands of dollars at VIP casino tables when he visited Vegas.

He was found dead on the 32nd level when police stormed his room, where 18 to 20 guns have been found.

Other witnesses have taken to social media to detail their version of events, with many stating that the noise sounded like pyrotechnics at first before understanding the real source.

Russell Bleck, who was also among the crowd when the bullets rained down on the crowd said he saw injured people everywhere

“Thank God it was a country concert,” he told the American news outlet, NBC News.

“You saw a lot of ex-military just jump into gear.

“I saw guys plugging bullet holes with their fingers.

“While everyone else was crouching, police officers were standing up as targets, just trying to direct people to tell them where to go.

“I mean; the amount of bravery I saw there was just — words can’t describe what it was like.”

As people ran for cover during the five minutes of gunfire, with just six to seven seconds to spare as the shooter reloaded the weapon, police authorities put the gambling hub in lockdown.

“Confirming that one suspect is down,” Las Vegas Metropolitan Police Department wrote on Twitter.

“This is an active investigation. Again, please do not head down to the Strip at this time.”

The department also said people should not “live stream or share tactical positions of our officers on scene.”

“This may put emergency responders in danger,” the LVMPD stated.