Thrills Casino is gearing up to add a new slot to their 325+ pokies catalogue at the end of this month.

Created by Yggdrasil Gaming, Nirvana shares a similar name to the previous Thrills.com exclusive slot by Net Entertainment, NRVNA. However, it definitely doesn’t appear to feature that zen ambience NRVNA has attempted to create.

There are an array of magical birds, including the phoenix and a bunch of magical ladies – which is quite obscure, but we are sure it will all tie in when it is released.

In order to activate the multiple bonuses, you first need to spin at least three Free Spin symbols to trigger the free spins. Then you will be able to pick one of the three bonuses to apply to the free spins – Nudge Reels, Wild Seeds, and Mega Reel.

Nudge Reels: This will see the reels nudge one place up or down after they have stopped.

Wild Seeds: Every spin two to four Wilds are randomly added to the the reels to give you a better chance at a win.

Mega Reel: The three middle reels will all spin in sync and stop on the exact same combination each free spin.

If you can’t wait for this release, try the latest Yggdrasil addition, Doubles, which was added to the catalogue last month. 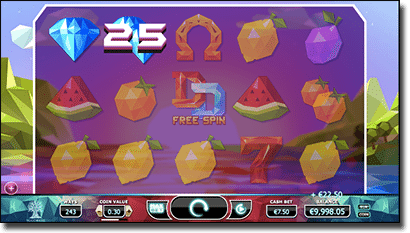 There are 243 ways to win that has a video game type of feel to the slot. You can also have the chance to win up to 50 free spins, simply by spinning five free spins symbols – four lands you 20 free spins while three scores you 10 free spins.

Then there is the bonus symbol that lets you pick which symbol you would prefer to be shown as a double symbol – Wild symbols and Free Spin symbols aren’t included.

Head to to www.Thrills.com and sign up now to take advantage of the $500 in matched deposits and 50 free spins on Net Entertainments’s slot, Starburst.
Tags: NewPokiesThrillsYggdrasil
Show More