GameCo is bringing skill-based pokies to Australia in August 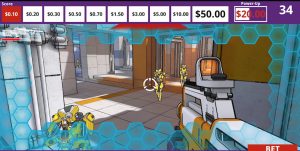 There’s been a lot of talk about skill based casino games recently, with gaming machine developers now setting their sights on Australia.

Skill based slot machines were developed in a bid to attract a younger generation of players to casinos, with millennials showing very little interest in the traditional push-button pokie machines. For a generation that has grown up with the immersive, highly detailed video game experiences offered by Xbox and PlayStation, the computerised pokie machines just don’t cut it.

Recognising this gap in the market, casino game manufacturers have been introducing gambling machines with arcade-style features, skill-based bonus rounds, puzzle games and shooter-style games in the hopes of bringing younger players to the casino floors. While the “skill based” machines are still based predominantly on luck, payouts can be influenced by player ability.

GameCo, a manufacturer of “video game gambling machines” has already previewed its skill based slot machines in Macau, Las Vegas and Atlantic City, and is now exploring the possibilities of expanding Down Under.

GameCo chief executive Blaine Graboyes said, “Australian operators have shown interest in skill-based [machines] and our games. There are a number of efforts under way within the region to consider how skill-based gaming may be considered.”

He added, “We are currently working with partners for expansion throughout Latin America, the UK, the Netherlands, and into Asia, particularly Macau.”

GameCo will be presenting its skill-based products at the Australasian Gaming Expo in Sydney this August. The company recently demoed games in Macau, exhibiting first person shooter-style game Danger Arena and touch screen puzzle game Pharaohs Secret Temple. While the games were well received, new regulations and licensing processes must be implemented before the skill based gambling machines will make it to Macau’s casino floors.

It is a similar story in Australia, with regulators already concerned about the potential harm so-called skill-based gaming machines could introduce.

“The government is monitoring the emergence of skill-based gaming machines through the Responsible Gambling Ministerial Advisory Council,” a spokesman for Gaming Minister Marlene Kairouz​ said.

Skill based gambling machines are being studied by the Gambling Treatment and Research Clinic at the University of Sydney, with researchers identifying that the “illusion of control” could be harmful to players who wrongfully believe they can sway the outcome of a game.

Head researcher Dr Sally Gainsbury said, “If you have betting machines that have an element of skill, the concern is that people will not have an understanding of where skill is involved and what comes down to just chance. And they could think that the more they practice the better they may get.”

GameCo is not the only manufacturer making waves in the development of skill based games. Gaming developers Gamblit and Scientific Games Corp have also had their video game gambling machines trailed in the United States, Macau and on cruise chips, with games proving to be very popular.