ONE of the world’s most prominent and successful professional poker players probably never expected to end up with such a bad hand. 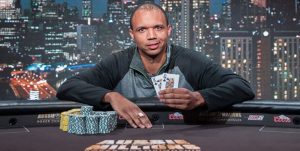 Ten-time World Series Of Poker bracelet winner Phil Ivey has been ordered by a federal judge to return $10.1 million in winnings to Atlantic City’s Borgata casino.

His associate, Cheung Yin Sun, has also been embroiled in the scandal.

It comes two years after the casino first sued the pair for what it claimed was cheating in a game of baccarat.

Ivey and Sun have always claimed that they used common poker methods of observation and skill in order to maximise their chances of winning.

The pair reportedly used a technique called “edge sorting” in order to gain the advantage over the casino.

Edge sorting isn’t technically illegal, and many professional gamblers, including Ivey, consider it to be a legitimate method of skill.

It involves the process of determining whether a face-down playing card is likely to be low or high, and involves countless hours of training and practice in order to perfect.

Casinos consider it a form of cheating. Ivey won US$9.6 million playing baccarat at the Borgata casino with Sun, and it was at this point that the property disputed the nature of their winnings.

As such, the casino launched legal action, and more than two years later has found the law on its side, which sets an intriguing precedent.

“What this ruling says is a player is prohibited from combining his skill and intellect and visual acuity to beat the casino at its own game,” [Ivey’s lawyer] said, via the Mercury News. “The casino agreed to every single accommodation requested by Phil Ivey in his four visits because they were eager to try to win his money.”

Ivey is expected to appeal the decision.

Interestingly, the case against Ivey and Sun claims the two used a cheating device, which is explicitly illegal in the state of New Jersey. Comically, that device was the card shuffler used by the casino to play the game, such is the nature of edge sorting.

As Ivey’s lawyers said, this outcome sets an intriguing precedent, as it outlaws the nature of using otherwise obvious (to the trained eye) tactics to beat the casino. In this case, the casino didn’t take the necessary steps to protect the house against such tactics, and as such I find Ivey was within his right to use this as a means to gain an advantage. I suspect the outcome will change the way professional gamblers approach the tactic, as well as how casinos deal with the issue. It will be interesting to see where it goes once the appeal process begins.

Fortunately, accusations like these cannot come into the equation at online casinos such as BetOnline Casino, which offers real money baccarat alongside dozens of other classic table games.