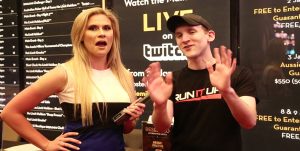 Somerville will host the event on his Twitch.tv stream account, with which he has built a large online fanbase of dedicated poker players looking to learn and develop their skills.

The expansion of the Championship onto an online-only platform shows just how far the event has come since its inception in 1998, with it now playing host to some of the world’s greatest poker players.

Twitch.tv will act as an accessible platform for fans to view the action, with the online streaming service having grown into the world’s fastest-growing social video platform, with more than 100 million members live streaming a diverse range of entertainment and events.

Somerville will live-stream the event on his person channel, kicking things off on January 27 and running through until January 29 in what will be the second year of the exclusive broadcasting partnership.

Somerville says the Crown Melbourne showcase is one of the most prestigious poker tournaments on the planet.

“I’m excited to present the action once again to fans around the globe. Last year’s broadcast was the most-watched live poker Twitch event of the year and I’m certain this year’s shows will be even better.”

Somerville made a career for himself as a professional poker player straight out of high school, relying on “free” money promotions to build a six-figure bankroll without depositing any money.

This eventually led him to the World Series Of Poker, which he has played in every year since turning 21. He signed a sponsorship deal with Ultimate Poker in 2013, and was announced as a Team Pokerstars Pro in early 2015.

The Aussie Millions poker tournament has grown substantially since first being introduced by Crown in 1998.

The series’ main event is the Southern Hemisphere’s richest poker tournament, with a prize pool in excess of A$7 million.

Not that Aussie poker needed such a publicity boost, Somerville’s stream last year made for some entertaining coverage of the event and its stars. His commitment to the event demonstrates its place among the world’s largest and richest poker tournaments. Australia’s been on the poker scene map for a while now, but Somerville’s involvement as a shining star only further establishes its place among the greats.