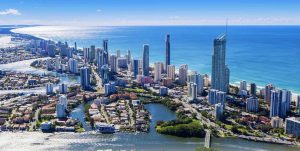 Queensland’s Premier has said the Gold Coast will not become a “casino city” after it was revealed Las Vegas casino giant Caesars Entertainment had set its sights on the Gold Coast as the potential site for its first Australian project.

Premiere Annastacia Palaszczuk said there is only one casino license up for grabs on the Gold Coast, and that is going to ASF Consortium, who won the bid for construction of a $3 billion integrated resort on Gold Coast’s Southern Spit. ASF’s plan is still waiting approval pending results from April’s public consultation before construction can begin. The results of the consultation are expected to be announced later this year.

Officials from ASF said Caesars Entertainment was just one of the operators it met with to discuss the operation of the casino portion of the integrated resort.

Ms Palaszczuk said, “There’s only so many casinos we can have on the Gold Coast – I don’t think we need to have this a casino city. The Gold Coast has so much to offer.”

Her comments have been met with scorn from The Greens, who say Ms Palaszczuk’s response is “bewildering.”

Greens Co-Deputy Leader and spokesperson for gambling, Larissa Waters, released a statement questioning why if Ms Palaszczuk doesn’t want the Gold Cost to become a casino city, did she approve ASF Consortiums proposal?

Ms Waters said, “Why is her government proposing to destroy publicly owned green space for yet another casino?

“70 percent of Gold Coast residents don’t want the mega-casino proposed for the Spit. But the State Labor government isn’t listening, no surprise seeing as they’ve happily taken tens of thousands of dollars from the Chinese consortium behind the Spit mega-casino and their business partners.”

Ms Waters argues that research conducted by Tourism Australia has revealed visitors want to come to the Gold Coast to enjoy its beaches and natural beauty, “Not to lose money hand over fist and to line the pockets of billion-dollar casino consortiums.”

There is already one major casino operating in the area, the Star Gold Coast (formerly Jupiters Casino), which is currently undergoing a $1 billion renovation ahead of the 2018 Commonwealth Games. Queensland now houses more land based casinos than any other state or territory in Australia.

Ms Palaszczuk confirmed, “There’s only one casino license available on the Coast at the moment and our government is going through due process in relation to ASF.”

Looking for a safe online casino?