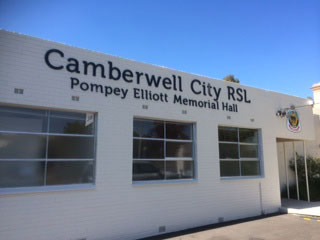 The Returned and Services League (RSL) and licensed gaming go hand in hand, but the winds of change are blowing.

There is now a growing population of younger veterans who believe RSL clubs need to dispense with poker machines and lessen their reliance on gaming revenue.

Among those is Dave Petersen, a former artilleryman who served in Afghanistan and now acts as president of the Camberwell City RSL (pictured).

At 32 years of age, he is the youngest person in history to hold that rank at any RSL sub-branch in Victoria.

Petersen leads the younger brigade of war vets who feel too many clubs have strayed from the league’s core values.

“The problem with the big gaming clubs is that they’re focused on drawing in pokie players from the wider community, rather than on looking after veterans,” Peterson told reporters in Melbourne.

“Pokies, cheap parmas and pots for the general punter. That’s what these clubs are about.

“Younger vets look at these clubs and see nothing there for them.”

RSL Victoria embraced the legalisation of pokies machines in 1990, around the time veterans from the Vietnam war were rising to prominence within the organisation.

Nowadays more than 50 of the state’s 250 RSL halls are licensed gaming venues, raking in more than $200 million a year through player losses.

Only the Australian Leisure and Hospitality Group (ALH), owned by Woolworths, runs a larger pokies operation in Victoria.

Woolies is now under pressure to ditch its gaming assets, while Coles recently offloaded more than 300 machines with the sale of the Spirit Hotels chain.

Melbourne’s major sporting clubs are also under the spotlight, with Collingwood, Geelong and several more AFL clubs divesting themselves of their pokies interests in the past year.

Similar questions are now being asked of the RSL, and Petersen believes the organisation can flourish without the one-armed bandits.

“We see no reason to believe that poker machines provide benefits to veterans that cannot be provided in other ways,” he said.

Petersen is one of several younger members who will stand for leadership positions at the RSL state conference in July.