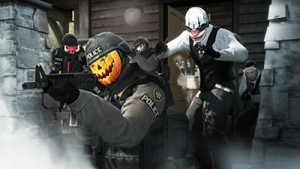 Independent Senator Nick Xenophon is calling for “insidious” video games with pay-to-win features to be classified as gambling in a new bill to be tabled when federal Parliament resumes next month.

Senator Xenophon says many of the more popular games in the professional eSports circuit were being used to exploit younger players in what he calls “the Wild West of online gambling”.

“Instead of shooting avatars, parents soon find out that [their children] have shot huge holes through their bank accounts,” Senator Xenophon told Fairfax Media.

Senator Xenophon is seeking bipartisan support for the bill, which is expected to redefine gambling to include “these sorts of games”.

In popular eSports title Counter-Strike: Global Offensive, players can pay as little as $US2.49 for gun skins and cases created by the game’s developer, Valve, which are rewarded via a randomised slot machine that could give common, inexpensive items, or lucrative “rare” items to the player. Players can then sell these items on the Valve marketplace.

There is also a highly lucrative “skin gambling” market, in which players can use skins acquired via the game to bet on competitive matches. This market is estimated to be worth US$7.3 billion.

Gambling on eSports has grown significantly over the past few years, and is estimated to be worth a staggering $US8 billion in 2016. Senator Xenophon says the current legislation, the Interactive Gambling Act 2001 (IGA), “may as well be 150 years old in terms of dealing with these issues”.

While it’s not yet known how far reaching the proposed bill would be, it could go as far as banning the sale of in-game items that vary in value to the player and experience. Alternatively, there could be age and spending restrictions put in place to stem exposure to minors.

Sally Gainsbury, senior lecturer at Southern Cross University’s Centre for Gambling Education and Research, said there was a connection between in-game purchasing and gambling.

Research conducted involving 2000 Australian adults showed that those who have bought items in a video game to help progress their in-game level are “more than twice as likely to go on to gambling as a result”.

Senator Xenophon’s urgency could be driven by recent controversies in the United States. A number of popular video game “streamers” were accused of having owned and operated Counter-Strike: Global Offensive gambling sites without having disclosed this to the audience.

Valve was named in two seperate lawsuits related to the gambling sites. One was by a Florida mother who claimed her son had lost a “significant” amount of money on one of these sites. Valve responded by sending cease and desist letters to 23 gambling sites, and warned a further 20 sites about the use of the company’s commercial property being contrary to its terms and conditions.