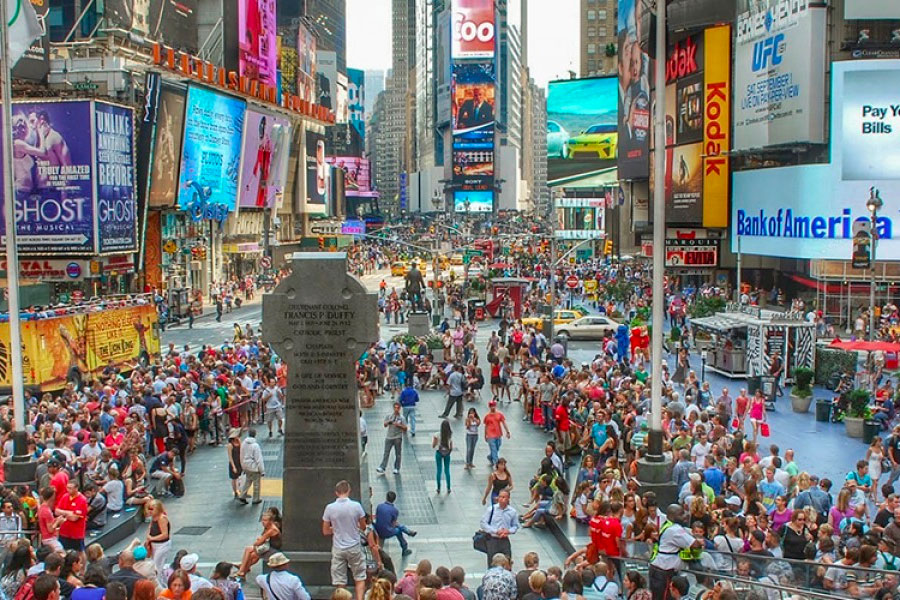 Billionaire rapper Jay-Z and his entertainment agency Roc Nation have joined Caesars Entertainment and SL Green in the bid for a New York casino in Times Square. According to reports, the three-way partnership is aiming to develop a gaming venue at the 1515 Broadway office tower.

The collaboration was announced on Monday during SL Green’s annual investor conference. The trio is among the half-a-dozen groups expected to submit proposals to the state for the Big Apple’s first full-scale casino.

The CEO of Caesars Entertainment, Tom Reeg, released a statement that disclosed the company’s excitement to work with Jay-Z and his entertainment-focused company.

“We are thrilled to have Roc Nation and JAY-Z join our partnership to bring Caesars Palace to Times Square. They are one of the most pioneering entertainment groups in the world, with New York embedded in their DNA,” Reeg said.

“Times Square has been the heartbeat of American Entertainment for over a century. Through our shared vision, we will build a world-class destination specifically designed to complement and elevate today’s Times Square experience, ensuring it remains a magnet for visitors and a hub of creativity for years to come.”

The details of the partnership are yet to be revealed; however, Jay-Z and his group will likely be responsible for the entertainment programming at the gaming venue as well as at other SL Green-owned properties in New York. SL Green is interested in around six properties in Times Square, which are over four million square feet in total.

Jay-Z also commented on the three-way partnership and promised to bring growth and more opportunities via the collaboration to the city.

“New York is the epicenter of culture. We have the opportunity to create a destination at the heart of the true crossroads of the world. My partnership with SL Green and Caesars has all the promise and commitment to economic opportunity, growth, and enrichment for the community and everyone that visits the Empire State,” the rapper said.

Marc Holliday, the CEO of SL Green, spoke on the addition of Roc Nation to the partnership and emphasized the importance of both the owner and the company in ensuring the casino’s success.

“Together, we will bring the nearly 130 million annual pedestrians a stronger and more exciting Times Square to visit, reunifying the bow tie around a new set of innovative programming that will appeal to New Yorkers and tourists.”

Holliday also shared some previously unknown information concerning the casino proposal. The venue is set to be called Caesars Palace Times Square. Contrary to claims that the casino take up a majority of the property, the gambling section will only occupy eight floors in the 54-storey tower.

None of said eight floors would be the ground floor because the area will be reserved for non-gaming purposes, like an entrance to the Minskoff Theater. The casino floors will also feature entertainment and dining.

According to Holliday, the “boutique” casino would likely have around 250,000 square feet of floor space. This size is minuscule compared to the gaming floors in Las Vegas or Atlantic City. There would be a five-star hotel with approximately 800 rooms constructed above the gaming venue. Holliday neglected to say how it would affect the office tenants in the tower, including Paramount Global’s headquarters.

Before the inclusion of Roc Nation, Times Square casino faced some opposition in the name of the Broadway League, which represents theater producers and owners. The group claimed that the gaming venue would provide limited benefit to other businesses because it mostly kept people inside wagering.

The SL Gaming CEO refuted Broadway League’s claims, explaining that the real estate developer’s proposal was created to elevate the businesses around it.

The League went on to oppose the construction of a casino in its midst, but several other involved parties enthusiastically announced their approval. These include the owners of restaurants like Bond 45, Carmine’s, and Juniors. The Actors Equity, as well as the hotel and construction Union, also supported the plan.

Per Holliday, reports by consulting firm AKRF claim that frequenters of the casino would likely purchase approximately 400,000 net new Broadway tickets every year. Caesars, SL Gaming, and Roc Nation would also buy thousands of tickets and distribute them to both customers in the casino and to underserved communities.

Caesars has a loyalty program called Caesars Rewards that boasts around 60 million members around the world. It provides bankable rewards for patrons they can use in hotels, stores, theaters, and restaurants outside 1515 Broadway.

The industry-leading loyalty program, which is home to over 65 million members, would be used to accelerate the economic recovery of New York via strategic partnerships with area businesses. The bankable rewards would drive more New Yorkers and tourists to area businesses and, in doing so create thousands of both direct and indirect jobs within and outside Times Square.

Holliday revealed that in accordance with the “halo effect”, the casino is expected to bring in seven million visitors to Times Square annually. This would generate $166 million in retail purchases beyond the casino building, over 600,000 overnight hotel stays, and seven million restaurant meals outside the gaming venue.

The 1515 Broadway project, according to SL Green, was needed to stop the slow but continuous decline in the district’s fortunes. Holliday explained that the slide did not signify a return to the anarchic days of the 1970s-early 1990s. Still, it shows a gradual unraveling of the sense of security and commercial energy of the region, which was securely in place only a decade ago.

In the past years, major firms like EY and Skadden have moved away from Times Square. Between 2012 and today, the office vacancy in the region has reportedly increased from 5% to almost 25%.

Several national retailers, like American Eagle Outfitters and Forever 21, have been looking to leave since Toys ‘R’ Us left Times Square in 2015. The decision is mainly due to a decline in the street environment quality. On the other hand, businesses like tacos, doughnuts, and other fast food-type joints have moved in.

By next month, the state will formally issue a request for proposal (RFP) for interested casino applicants. Selected responses would be moved to a state siting committee by the selection panel, and one location in the five boroughs is expected to be chosen before the year ends.