We all grew up with the tale of Jack and the Beanstalk. NextGen, a subsidiary of NYX Gaming, has decided to re-create our favourite childhood fairy tale in their latest release to bring us Jack’s Beanstalk online pokie.

Jack’s Beanstalk condenses age old tale of young Jack in pokies form. Jack was sent to market to sell a cow and make some money for the family, only to be swindled into swapping the cow for “magic” beans. When Jack returned home penniless with a handful of beans, his mother flew into a fit of rage and chucked the “magic” beans out the nearest window.

Over night the beans grew into a massive beanstalk leading into the sky. Jack climbed the bean stalk to come face to face with a cannibalistic giant. To help his poor mother, Jack ends up stealing gold, a goose that lays golden eggs and a magical golden self playing harp.

The giant eventually clues on to Jack and his thievery and attempts to catch him. An epic chase down the beanstalk ends with Jack taking an axe to the bean stalk, sending the giant to a grizzly death.

Jack’s Beanstalk is a five reel, 25 pay line pokie that can be played for fun or real money at our promoted online casino’s. It gets off to a great start with really lively, jaunty music. The graphics are great, with vivid and colourful cartoon impressions of the classic fairy tale.

Jack’s Beanstalk has a minimum bet of $0.25 per spin and a max bet of $50. This leaves the game open for beginners to high rollers alike. 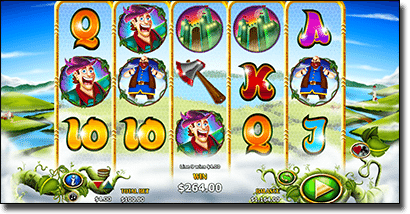 In descending order of value the symbols are Jack, the Giant, the Giant’s Castle, the Golden Harp, the Axe, Ace, King, Queen, Jack and 10.

Any three scattered Golden Egg symbols on reels two, three and four triggers the Golden Egg Pick Me Bonus. Once triggered the view on the screen will rise above the playing screen to reveal five geese. From there you get to choose three geese. Each goose chosen reveals a cash prize 25, 50, 75, 125, 250, 375, 500 or 2500 times your initial bet. The Upwild Feature grants three free spins. With each spin the Beanstalk at the bottom of the reel grows up one symbol until it is covering the entire reel after three spins. Each symbol the Beanstalk covers becomes wild.

It is possible to have all of reels two, three and four covered with wilds if you are lucky enough to trigger the Upwild feature on each available reel.

Where to play Jack’s Beanstalk for real money

NextGen online pokies can be played for free or real money at several of our top-rated recommended casino sites, including those listed in our table above. These reputable online casino sites all past our thorough testing process to ensure they offer a large selection of games in a secure, licensed environment, with real money deposits available using a range of trusted payment methods.

NextGen and NYX Gaming are generally known for their old school, retro online slots. With Jack’s Beanstalk they have broken their own mould and branched out to tremendous success. This has a fun and light-hearted feel and will universally appeal to all punters. The Upwild Feature is a generally new and fun idea.