You could be forgiven for playing NextGen’s Starmania slots and instantly being struck with an epic sense of deja vu. Starmania is eerily similar to a Net Entertainment game called Starburst. In fact, some of the similarities are startling. Both are ten pay line pokies with similar play symbols.

However, Next Gen have taken the original concept of Starburst and greatly improved upon it, incorporating aspects that punters have been begging for in regard to Starburst for years.

So how can you improve a classic? Let’s have a look at what NextGen’s Starmania is about and what Next Gen have done to improve on the original inspiration.

Starmania is a five reel, ten pay line slot that pays both left to right and right to left, essentially making it a 20 pay line pokie. Starmania can be played for free or real money at one of our promoted online casinos. Betting on Starmania starts at $0.10 per spin and can reach as much as $20 per spin. This doesn’t exactly cater to some of the real big spenders and fat cats at the world, but is just right for us “lesser mortals”. 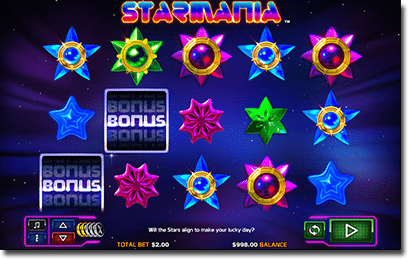 Starmania is available to play on your desktop, Android mobile device, iOS mobile device or iOS tablet, which makes access almost universal and easy these days.

The graphics on Starmania are bright, sharp and colourful, which makes for engaging game play. Our only problem with the visuals is the fact several of the symbols during spins are somewhat similar. This can be a little confusing when you first start playing the game.

The soundtrack matches the theme space theme to a tee, conjuring a mystical, otherworldly feel that pairs perfectly with the game itself. 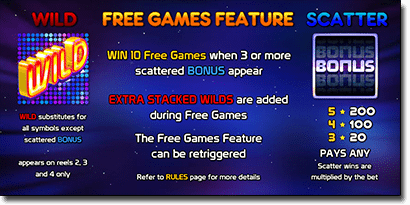 During general play, there is also a gamble feature that is available after any win. Just click the heart and club button that appears above the spin button after a win. From there you can either double your win by choosing either black or red or quadruple your win by choosing the correct suit of the card to be flipped.

These symbols can be a little confusing at first, because at a glance you may see that you have an active line with five green stars, only to be disappointed to realise that they are in fact two different symbols of green stars.

The Wild symbol appears on reels two, three and four and substitutes for all symbols except the bonus symbol.

NextGen games can be found at the top-rated real money online casino sites recommended in our casino table above, which we recommend for their welcome bonuses, quality of games catalogue and player safety.

Starmania is very similar to Starburst in some aspects, like the theme, symbols, the mirror pay lines and background music but where it distinguishes itself is in the wild and the feature. Starburst was monotonous in that the wild symbol was the feature symbol, and at best you could only milk three free spins out of it. Starmania has a separate wild and scatter trigger symbol and gives you at least 10 free spins with stacked wilds.

All in all, Starmania is a fun game that offers up great opportunities to win big. Our only criticism is the fact some of the star symbols look a little similar at a glance. But this problem becomes null and void once you have played it for a little while.