King Kong has been incredibly successful in capturing our hearts on the silver screen since 1933, when the original film was released. While there have been remakes after remakes, we are still greeted to the incredible ape called Kong, who meets a fateful end after trying to win the likes of a beautiful young lady, which is the main premise for NextGen’s pokie game King Kong.

How to play King Kong

NYX Gaming, the parent company of NextGen, acquired Cryptologic in 2015 and while this saw the reduction of titles available by Cryptologic under their name, we are now seeing the re-release of many titles under the NextGen name, including King Kong.

Set on a backdrop of high rises, featuring spotlights searching for Kong, we are treated to the cartoon-like symbols across the reels. These symbols lack any depth as you spin, but when you win the graphics light up and 3D technology is utilised to bring the reels to life.

The music is quite suspenseful as we roam the towers with Kong, but you can mute it by clicking the music symbol icon in the bottom left hand corner. 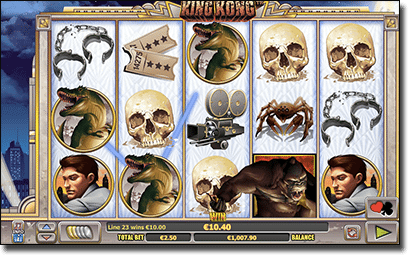 You can also stop the reels at any time after you’ve pressed spin if you want to have more control.

King Kong has been optimised for the HTML5 platform so you can tap the reels and win on your smartphone or tablet – Apple, Android and Windows operating systems are all compatible. You can tap our links to the secure online casinos offering King Kong to access the game on your mobile device.

There are 10 standard symbols on the reels, plus a Scatter and Wild, with each created to tie in perfectly with the theme – no use of the traditional A to 9 symbols here.

The lower paying symbols include the tickets, the handcuffs, the skull and and the old school camera, with the top payout of these symbols (150 coins) scored by spinning five skulls or five cameras.

The middle paying symbols include the tarantula, the ship, the plane and the dinosaur, with five planes or dinosaurs scoring you the top payout of these symbols at 500 coins.

The high paying symbols are represented by the main characters including Carl Denham (the film director) and Ann Darrow (the actress who Kong falls in love with) with the top payout of 7500 coins paid out by spinning five of the Ann symbols.

Wild: The Wild is King Kong and substitutes for all symbols except the Scatter. He only appears on reels 2, 3, and 4, but when he lands on reel 3 he will trigger the King Kong Goes Ape Feature.

Scatter: The Scatter symbol is the King Kong logo and spinning two will score you the minimum payout of 25 coins, while the top payout of 2500 coins can be won by spinning five. Additionally, if you spin at least three you will activate the King Kong Smash Feature.

While there’s a small amount of features to this title, they are colossal in size.

Once you’ve landed a Wild on reel 3, the King Kong Goes Ape feature is activated and here the Wild will expand over the entire reel and as Kong goes ‘ape’ he will smash through the symbols even adding extra Wilds to reels 2 and 4 as he goes, for big wins.

When you spin at least three Scatters you will activate the King Kong Smash Feature. Here, the reels will transform to Kong on top of a high rise and you will be able to choose whether to ‘smash left’ or ‘smash right’ when planes fly past. The more planes you smash the more spins you will score, as follows; 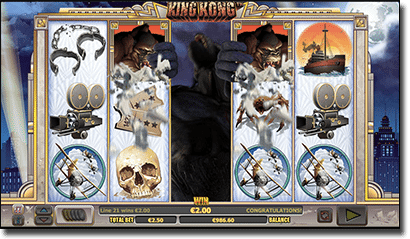 As you can see you can win up 150 free spins on this pokie. There’s also the option to select a mystery prize from three symbols instead of taking the free spins.

Additionally, there’s the Gamble feature where you can double or quadruple your winnings by picking the colour of the card, out of red or black, or the suit, out of Spades, Clubs, Diamonds, and Hearts.

While this pokie has been available before, we aren’t sad we’re seeing it again especially due to the exciting features – 150 free spins are incredible.

The first time we triggered the Free Spins feature we won a whopping 50 free spins, which is exceptional in itself. This didn’t payout as much as we thought over the number of spins – just over $100 – but the potential is there.

The animations and the Wild feature keeps you holding on, so we’re happy NextGen brought this Cryptologic title back for us to play.