The original Rocky movie, written by and starring Sylvester Stallone, was one of the surprise hits of 1976. With that in mind it makes sense production company Playtech would serve up a Rocky online slot for our playing pleasure. The great thing about this game is that it doesn’t just cling to the original Rocky film – it draws inspiration from its sequels too and applies these different aspects to the game itself.

The original Rocky movie told the story of struggling debt collector Rocky “The Itallian Stallion” Balboa and his meteoric rise once he is selected to fight the reigning world champion. The original Rocky was so popular it managed to walk away with three Academy Awards and spawned five sequels. These pokies game by Playtech is equally as enthralling as the film, with great gameplay features and massive bonuses to win. 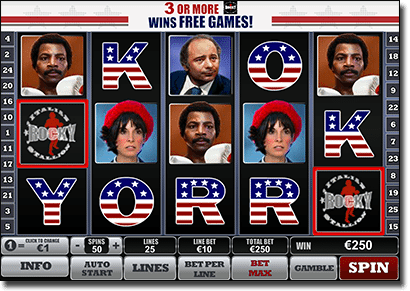 Where to play Rocky online slots

Developed by Playtech, real money punters can play Rocky online pokies at our top recommended pokies specialist casino site, Slots Million. With over 1800+ video slots in its catalogue, players have a ton of variety to enjoy and you can even play Rambo slots if you’re in the mood for more Sylvester Stallone.

To sign up for an account at Slots Million casino, simply click the banner below on your computer, laptop, smartphone or tablet device and be directly taken to the site, where you can redeem and take advantage of exclusive bonus sign-up credits.

How to play Rocky online slots

The Rocky online slot is a five reel, 25 payline pokie. There is nothing new or flashy in the format: I love a traditional 25 payline slot.

The graphics of this game are vivid, bright and appealing. In keeping with the boxing theme of Rocky the background sound when you click the “Spin” button is that of a speedbag being hit.

Rocky also offers an optional “gamble” feature after each win.

Rocky strays a little from the normal formula of online slots in that it has replaced the time-worn tradition of using Ace, King, Queen, Jack and 10 as symbols. Instead Playtech has opted to use the filler symbols to create another fun feature. The filler symbols are in descending order are R, O, C, K and Y and if you manage to spell “Rocky” scattered from left to right across the five reels you are awarded five times your initial bet.

Rocky also boasts symbols of famous characters from the Rocky film franchise. In descending order of value the symbols are Apollo Creed, Ivan Drago and Clubber Lang with Adrian and Micky both worth the same amount. When Apollo, Ivan and Clubber symbols win with three or more symbols on an active payline a clip from their respective film plays.

The Rocky symbol acts as a wild, five of which on an active payline is the biggest pay-out in the game worth 10,000 coins.

The Knockout Bonus Game is triggered when a white boxing glove appears on reel one and a red boxing glove on reel five.

Once triggered, you get to choose who Rocky will fight: Apollo Creed, Ivan Drago or Clubber Lang.

Rocky will go up against his opponent across 10 rounds. Each round that Rocky wins rewards you with x3 your initial bet. Each round shows clips from the relevant film. If Rocky manages to defeat his opponent in less than 10 rounds, then Rocky is presumed to have won the remaining rounds and you are paid accordingly.

Any three, four or five scattered Italian Stallion symbols triggers 15, 20 or 25 free games with all wins during free games x2. As well as that more wild Rocky symbols are added to the reels.

When the feature is triggered the background to the playing screen turns from black to white and the game is energised by an 80’s training montage track. Each of the character symbols also shows a different clip from the main game. These clips are mostly training clips to keep in theme with the “training montage” theme of the feature.

The feature can be re-triggered during free games with any three or more Italian Stallion symbols adding an extra 15 free games.

This is a great game with massive potential for big wins. The addition of a gamble feature is great to see too.

Another critique would be that each of the letters in “ROCKY” that appear across the screen are all in the same colours of the American flag. At a quick glance there is no difference between the symbols with each of their colour scheme exactly the same.

Aside from those two minor aspects Rocky is a great game which is fun and interactive with a feature and bonus game.