Movie buffs will enjoy this pokie from Playtech, which is based on the movie Top Gun – famous for the one liner “I feel the need – the need for speed!” The best part about Playtech pokies is when they base their games on a movie they use all the actors, instead of animations, giving fans an extra taste of the film – though this one is unfortunately missing something (or someone). However, whether or not pokies buffs will enjoy this one is what we are here to find out.

How to play Top Gun

Top Gun by Playtech is a 243 ways to win pokie based on the iconic film released in 1986 starring Tom Cruise and Val Kilmer. While we are greeted to all the unusually named pilots, including Goose, Iceman, Jester and more, we are missing Maverick (played by Tom Cruise) as Playtech were unable to use his image for the pokie.

While this isn’t the software providers fault, this does make the theme feel as though something is missing but if you prefer gameplay anyway you won’t notice the lack of Cruise’s appearance. Playtech do know not to mess with the film too much though, keeping the design quite simple with the reels placed up in the sky, as we follow the story of the Navy’s elite fighters in a class to become the best. There are a huge number of coin sizes and minimum and maximum limits to suit every bankroll. 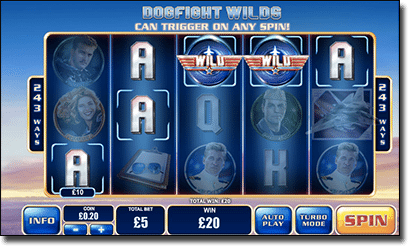 Upon entering the game we are greeted with the song Take My Breath Away by Berlin, which is a nice change from the mechanical audio a lot of pokies have. After a while it can get quite irritating, so you may want to mute this in the top right hand corner.

We can’t fault Playtech’s high quality graphics offering crystal clear symbols including the A, K, Q, and J as the lower symbols, with five A or K symbols paying the most at 50 coins. The middle value symbols are represented by the glasses, the pilot jacket, and two of the pilots, one circled by a red ring the other by a green.

The high value symbols includes two more pilots, one circled by a light blue ring and the other circled by a teal ring, while the woman pilot pays the most – five symbols will score you 1000 coins – which is the character Charlie in the movie.

However, the Wild and the Scatter symbols are what you need to keep an eye out for. Playtech offers the standard Free Spins feature as well as a unique Wild bonus in their pokie Top Gun.

Playtech’s Top Gun is quite a simple pokie with a small amount of free spins, which can be somewhat difficult to trigger due to the requisite of spinning the Scatter on specific reels. We spun the reels for almost 200 spins and still didn’t manage to activate the free spins.

The Wild bonus is a unique addition, but there isn’t much to it other than adding extra Wilds to the reels – though when this happens you can win big. While movie themed pokies generally offer more than a standard pokie thanks to the inclusion of famous actors, we can’t help but think Playtech relied on this a little too much.

The large range of coin sizes and the 243 ways to win format are positives and if you are a fan of the movie you will enjoy the pokie, although the lack of Tom Cruise is a bit disappointing – but we know this isn’t Playtech’s fault.

Overall, Top Gun is a simple pokie and if you are new to the 243 ways to win format or a fan of the movie this one will be for you.