Gonzo’s Quest: The Search for Eldorado released in 2010 and its unique format, use of incredible graphics and the loveable hilarious character of Gonzo himself helps it remain one of the most popular online pokies games today.

Based on the real story of the Spanish conquistador Gonzalo Pizarro, this pokies follows Gonzo on his quest to find the mythical South American city of Eldorado. You know you’re in for a treat from the moment the game intro loads, with cinematic graphics showing the ballsy Gonzo fleeing his ship in the middle of the night to swim to shore in the hopes of uncovering the ancient city.

Set against a backdrop of the Peruvian jungle and using symbols of Incan relics, the funny, murmuring Gonzo stands to the side of the reels ready to break into a celebratory dance or a disgruntled moan depending on the outcome of your spin.

How to play NetEnt’s Gonzo’s Quest

Gonzo’s Quest is a five reel, 20 pay line slot game by Net Entertainment that uses a ‘no reel spin’ format, instead using an Avalanche feature where spinning reels have been replaced by falling stone symbols. For every winning combination that lands, the winning stones explode to make room for new ones, which not only looks really cool but also activates the potentially lucrative multiplier feature.

Wagering details and game specifics for Gonzo’s Quest are as follows: 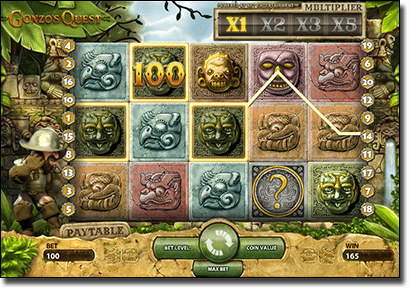 The game also comes with many adjustable features, including things like an auto-spin option and the ability to adjust sound effects and graphic quality.

There are no additional bonus games within Gonzo’s Quest, but there are some special features that give you a big chance to boost your winnings along the way.

Gonzo’s Quest is one of NetEnt’s leading titles so you’ll likely find it available at all reputable NetEnt casino sites. Given its popularity and the great example it provides of Net Entertainment’s innovation and animation skills, Gonzo’s Quest is often the free spins game offered with casino welcome packages. Our favourite sites to play Gonzo’s Quest for real money bets in AUD are:

Both of these secure casinos have some fantastic welcome packages available for new players, so follow our links to sign up and get started with more for your money.

Gonzo’s Quest takes a serious figure within the rather brutal colonisation of Peru and has successfully turned it into a light-hearted, humorous pokies game that is fun to play and also has the potential to be quite lucrative when those avalanche multipliers and Free Falls are in place. The cascading format adds a unique spin and it’s a laugh to see Gonzo come to life from time to time, victory dancing across the screen. The level of animation that’s gone into this is pretty epic, and the sound effects are quite tranquil and really help to set the scene.

The only real bummer is the lack of bonus games. While there are some sweet bonus features to boost winning potential, we would have loved to see Gonzo in a mini game, purely to see this lovable character being utilised to full force. In saying that, the Free Falls and Avalanche multipliers are enough to make up for the lack of scatters or bonus games and Gonzo’s Quest continues to be one of our NetEnt favourites.