Following the early 2016 release of the Guns ‘N Roses pokies game, Jimi Hendrix online slot is the next addition to the NetEnt Rocks collection. This exquisite game showcases the finest of NetEnt’s capabilities, featuring a gorgeous, psychedelic backdrop and impressive imagery which truly captures the essence of the hazy rock and roll of the Sixties. You don’t have to be a fan of the guitar legend to enjoy this game; this is one of the best NetEnt releases to date, packed with bonus features, beautiful animation and flower power galore.

Jimi Hendrix is a five reel, 20 payline video pokies game with multiple special features and bonus rounds. To play for real money, load the game at one of our recommended NetEnt casinos and select your bet level using the ‘level’ and ‘coin’ buttons at the bottom of the reels, then press ‘spin’ to play. Jimi Hendrix online slot is available for both mobile and desktop play and can be accessed on PC, Mac, Android and Apple devices. 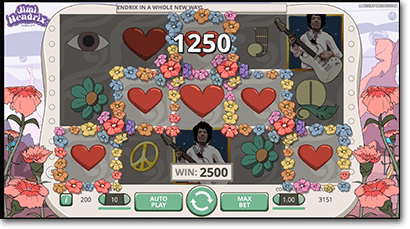 An auto spin feature also provides the option of playing up to 1,000 spins with the click of a single button.

Any time a win is spun the reels spring to life with hundreds of blooming flowers, sweetening each victory. There are multiple special features and bonus games in Jimi Hendrix pokies including:

Wild symbol – the wild symbol is the close up picture of Jimi Hendrix’s face, and will substitute all other symbols to form a winning combination except for the scatter symbol.

Scatter symbol – the scatter symbol is the image of Hendrix in a light pink shirt playing a white guitar, appearing on reels three, four and five only. An appearance of three or more scatter symbols triggers the Click & Pick Bonus Round. Red Guitar Re-Spin – the appearance of four or more red electric guitars anywhere across the reels during the main game will activate the Red Guitar Re-Spin Feature, where a re-spin is granted for free. If a new red guitar symbol appears during re-spins, more re-spins will be awarded, continuing until no new guitar symbols appear.

Where to play Jimi Hendrix for real money

The Jimi Hendrix pokies game can be found at several leading multi-provider casinos, available for free play in demo mode as well as for real money bets. The top NetEnt casino sites recommended by us are listed in the casino table above.

Sign up for an account with any of these venues using our links and you’ll claim some great welcome offers like matched deposit bonuses which will give you more for your money when playing Jimi Hendrix for real wagers.

Jimi Hendrix is not only one of NetEnt’s finest pokies to date, it’s one of the finest pokies of any online game developer. The designers behind this game really went the extra mile to make sure the game captures the spirit of the 70’s, with stunning use of imagery which embodies everything Jimi Hendrix stood for; peace, love and rock and roll. The pile of bonus features adds to an already excellent gaming experience and makes us excited to see what’s to come from the next instalment to the NetEnt Rocks collection – a Motorhead themed game set to be released later this year.