Fans of the hit TV drama series 24 are in for a real treat, as iSoftBet has teamed up with 20th Century Fox to bring this acclaimed show to the reels.

To celebrate the release of the 24 pokies game, Slots Million is running an exclusive 24 day promotion, with huge cash prizes up for grabs for punters who give 24 a whirl for real money bets. Players can score from $100 to $250 in free money, while making it all the way to the 24th day of the promotion could earn you a huge $1,000.

To get the low-down on the specifics of the promo contact the support team using the live chat option to learn more. To be eligible for the cash giveaways you’ll need to have an account with Slots Million Casino.

If you’re new to this site, follow our links to sign up and you’ll also nab an enticing welcome package of a matched deposit bonus and 100 free spins on selected NetEnt pokies. Deposit funds to your account using a range of safe deposit options in AUD like Visa, MasterCard, Neteller, Skrill and PaySafeCard and start playing 24 and the cash could be yours. 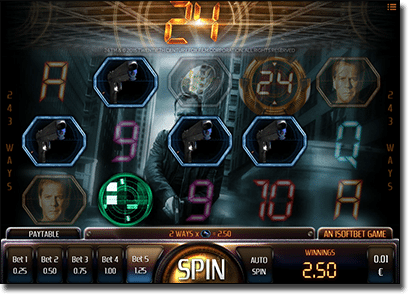 The 24 pokies game uses imagery that’s true to the TV series, with photographic screen grabs featuring the star of the show Keifer Sutherland.

The game is as action packed as the series, giving players an adrenaline powered ride filled with free spins, multiple exploding wilds and a truly kick ass bonus feature. The bonus game allows you to win up to 100X your active bet with a 10X multiplier also up for the taking to make that jackpot even bigger.

iSoftBet is no stranger to cinematic partnerships, with previous film and television pokies collaborations including Beverley Hills 90210, Basic Instinct, Rambo and The Love Guru, but 24 is a particularly interesting choice. The software developers have pulled off the game with true authenticity to the TV show while maintaining the level of excitement, ensuring that fans of 24 will not be disappointed.

Where else can I play 24 pokies?

iSoftBet is a relatively niche software studio and isn’t available at every single online casino site. However, if you’re looking for real money casinos with licensed games based on the most popular television shows and Hollywood blockbusters, players from United States should consider signing up for an account at BetOnline Casino, which boasts hundreds of the Internet’s best online pokies and offers regular comps, promos and bonuses to sweeten the deal.