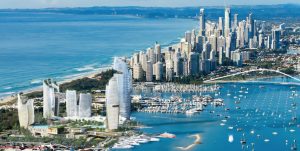 After years of planning, development and public campaigning, the Palaszczuk Labor government made the shocking announcement on Tuesday to can ASF Consortium’s $3 billion casino project on the Southern Spit.

Chinese-owned ASF had been planning to build a five-tower integrated resort on the vacant crown land which would include a casino, six-star hotel, residential apartments, entertainment venues and retail spaces. The project had been touted as the largest and most exciting tourism project on the Gold Coast in decades, and was expected to create 13,000 new jobs and attract an estimated 1.5 million additional tourists to the region each year.

After months of community consultation addressing concerns over height restrictions, traffic congestion and gambling related harm, Premier Annastacia Palaszczu met with local council to announce ASF’s bid would not go ahead. The Cabinet decided to terminate the ASF project and proceed with a master plan for the parkland area instead.

Ms Palaszczu said, “This is a unique site – the equivalent to what Central Park is to New York. It should be preserved for generations. What the Spit really needs now is a master plan to revitalise it and increase its benefit to the Gold Coast as a community asset.”

The Palaszczuk government has left the possibility open for a new cruise ship terminal to be built at The Spit, but said there will be no developments approved over the existing three-story limit.

The announcement comes as good news to The Star Entertainment Group, who now hold a full monopoly on casinos in the area. The Star Group owns Star Casino on the Gold Coast (formerly Jupiter’s Casino), the Treasury Casino in Brisbane and has a $3 billion integrated resort project in the works on Brisbane’s Queens Wharf precinct.

The decision will also keep community groups like Save the Spit happy, who campaigned against the project due to its potential impact on local residents and wildlife.

Not everyone is thrilled about the termination of the project, however. ASF went into trading halt on the Australian Stock Exchange and has not yet commented on the government’s decision, which comes just days after ASF signed a deal with global casino giant Caesars Entertainment as the potential operator of the Spit casino.

Save Our Spit spokesman Steve Gration said, “There will be a great portion of Gold Coasters who will be cheering, and the economic jobs doomsday conspirators will be saying it’s the death of the Gold Coast if we don’t have a casino on the spit.”

Gold Coast mayor Tom Tate said the council would now look for other ways to create jobs in the area, focusing on education, medical and the “Gold Coast health and knowledge precinct.”

Gold Coast North Chamber of Commerce president Martin Brady said he still hopes to see parts of The Spit developed into an entertainment precinct based on the prime area it is in.

“There hasn’t been too many major projects, apart from the Commonwealth Games, on tourism infrastructure on the Gold Coast in a long time,” he said. “We need opportunities for people on the Gold Coast be trained up in a career, like hospitality.”

Denial of the ASF Consortium project doesn’t mean the Gold Coast won’t get a second casino in the future, with the possibility of a second casino license still on the table.