Canberra’s pub owners request a place in the pokies market 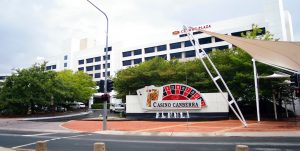 Pub operators around Canberra are asking the ACT government for permission to operate electronic poker machines after Casino Canberra was given the green light to operate 200 pokies for the first time.

In the ACT, the states 5,000 pokie machines are only allowed to operate within approved clubs. A unique trading scheme is used, where clubs can buy and sell gaming machines amongst themselves. The 200 pokies approved for Casino Canberra will need to be acquired by developer Aquis from existing licensees.

Canberra’s pub owners are now arguing that if the clubs and casino are allowed to offer the real money pokies, then they should be too.

President of the Australian Hotels Association ACT Michael Capezio is asking for 200 pokies to be spread across 20 of Canberra’s pubs, allowing a maximum of 10 gaming machines per venue.

“Realistically there is no difference between a club and a pub – what we offer and what they offer is very similar. We are as much part of the community,” he said.

“Our argument is leave the status quo as it is, or if the casino gets machines and is allowed to participate in the trading scheme so should we.

“When a club can provide a heavily subsidised meal at a loss then they are a real competitor and they can do that on the back of revenue from gambling. Good luck to them, but it’s got to be fair. And by giving machines to the casino it just distorts it even further.”

ACT’s clubs already benefit from lower tax rates than pubs, including lower gambling taxes and no income tax, but the hotel industry is not seeking the same concessions.

Mr Capezio belives that ACT club’s monopoly on the pokies is no longer justified and described the machine trading scheme as a “rort.” He said the revenue Casino Canberra will earn from the addition of pokie machines will be used to drag business away from pubs.

Chief executive of Clubs ACT, Gwyn Rees, said the hotel industries request for pokies was “interesting but understandable if the government is prepared to give them to a foreign owned casino and ignore Canberra-owned pubs and taverns”.

The request adds more fuel to the already heated debate about the ACT’s pokies industry, as clubs have come under fire for ignoring responsible gambling practices and finding loopholes around withdrawal limits in gaming venues.

Clubs ACT is currently working on a paper to submit to the ACT government about ways the gaming industry can improve and offer safer gambling practices moving forward. The organisation is also asking the government to help clubs who would like to separate themselves from the gambling industry altogether by offering incentives to hand over their existing pokie machines.

The government has already announced a cut back on the number of pokies licensed to operate within the ACT, with the compulsory reduction to 4,000 machines scheduled to start towards the end of 2017.

Whether you call them poker machines, pokies or slots, players from United States can find them online at BetOnline Casino the best online casinos available on the web.